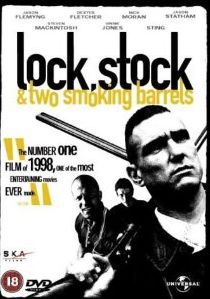 ReviewCrime
Review Article Go back to homepage
Work shy, and talented card player, Eddy enters a money making scheme with three of his best friends. They each stake 25,000 pounds to allow him to take a seat at the card table of notorious gangster and porn king Hatchet Harry. Hoping on a healthy profit they end up owing a packet with only a week to come up with the money. Failing to pay will result in losing a finger for every unpaid day or hand over JD's bar. They need a plan to find the money, and fast.
Nick Moran, Jason Statham, Jason Fleming, Dexter Fletcher, P.H Moriarty, Sting, Vinnie Jones, Lenny McClean, Stephen Marcus, Steven Mackintosh, Vas Blackwood
Crime
2
1 Hour 55 Minutes
Thank you for supporting DVD365.net when you order using the link(s) below.
Buy DVD
Story

After the robbery they try to sell some of the cannabis to a local dealer, but unfortunately they end up trying to sell the stolen drugs back to the people they stole them from in the first place! Needless to say, they are not too pleased and go after Eddy and the rest of the group. The gang who had all the money stolen from them want their money back and also come after them.

Sit back and enjoy the show as all the local gangsters end up hunting each other along with the arrival of big Chris, the debt collector hired by Harry, who wants his £500,000 payment. There's still more. Eddy and the group bought a set of guns from Nick the Greek to be used in their heist. However, these guns were stolen to order for Harry and are worth a fortune. Now the bungling duo who stole them want them back.

The picture has a definite yellow tinge to it but I'm led to believe that this is deliberate, other than that it is a crisp and sharp. The sound is clear and precise with some great music on the soundtrack. Bizarrely, some of these tunes are sometimes mismatched with either plenty, or no, rear channel action.

I'm not really sure what classes this as a directors cut as there is certainly no director's commentary to go with the film. What you do get is a 30 odd page booklet containing character and production information. Just why this couldn't have been on the DVD escapes me, but I expect this disc was a cheap effort to make more money. The standard American version contains the full screen and widescreen versions of the film, production featurette plus the American trailer. Why couldn't these be on this disc?

If you already own the standard edition then you shouldn't buy this as there is nothing really special about this release at all. On the other hand, if you haven't seen this film before then you should definitely buy this British classic as there's plenty of great British humour.