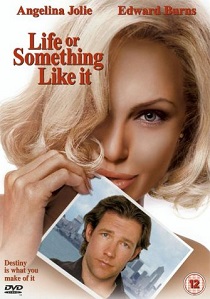 ReviewComedyRomanceAngelina Jolie
Review Article Go back to homepage
When a prophet informs Lanie, a self obsessed television reporter, that she only has a week to live she decides to go out with a bang and live life to the full.
Angelina Jolie, Edward Burns, Tony Shalhoub, Christian Kane, James Gammon, Melissa Errico, Stockard Channing, Lisa Thornhill, Gregory Itzin, Max Baker
Comedy, Romance
2
1 Hour 39 Minutes
Thank you for supporting DVD365.net when you order using the link(s) below.
Buy DVD
Story

Lanie Kerrigan is a beautiful, but self obsessed, blonde reporter for a Seattle news station. She has everything she could ever ask for; a baseball-superstar boyfriend, a wonderful apartment and after a string of successful reports, the chance of a job with a national network in New York. What more could a young television reporter asked for? The only thorn in her side is her newly assigned cameraman, and ex-lover, Pete.

However, everything changes for Lanie when Pete convinces her to meet the homeless Prophet Jack for an interview. Jack has the uncanny knack of predicting the weather, the traffic and even the sports results so when an important football game approaches it makes sense to get his angle. Jack is more than happy to provide his predictions for some small change, but after providing Lanie with his sports prediction he has some bad news for Lanie. When she asks him whether she'll get the job in New York not only does Jack predict she won't get the job, but she'll be dead in seven days.

Lanie is, unsurprisingly, highly sceptical of the predictions and dismisses it as ramblings from an old fool, albeit with a nagging worry in the back of head. But when Prophet Jack's other predictions start to come true Lanie is forced to re-evaluate her life as the day of her apparent demise quickly approaches. Turning to Pete for help they soon rekindle their romance and he shows her there is much more to life than just a career. After long overdue visits to her family and spending quality time with Pete and his son, Lanie feels happier than she has ever done before. But is it too late for Lanie or can she change her destiny?

The picture is bright and colourful with a high level of detail throughout. The rich colours not only accentuate Jolie's hideously over the top blonde bouffant, but highlights her famous large pouting red lips in great detail. If a career change was ever warranted she'd certainly have no problem getting a job as a GMTV weather girl! The picture remains free from signs of dust specks and other picture imperfections and with an above average bit-rate, and with only a few instances of outlining, the picture quality is on par with many a bigger budget title.

As to be expected with a film of this genre, the sound is nothing special but it more than adequately meets its needs. The dialogue remains clear and precise in the centre channel whilst the rear channels are rather under utilised and only seem to be used to any effect by the musical score. The sound levels remain reasonably constant throughout and with no real surprises lying in wait once a comfortable listening level has been reached there is little need to adjust it.

Whilst most Twentieth Century Fox DVD releases normally come with a reasonable set of extras, this discs specification must have been lost down the back of some executives chair as it is totally devoid of any bonus material. Even the menu is a static and silent affair which harks back to the bad old days of early region two releases. I won't even lower myself to class "scene access" as an extra. However, if this poor showing were not bad enough, the region one edition did at least manage to provide an audio commentary from the director. Is this still lingering down the side of the chair too?

This film is portrayed as a romantic comedy and romantic it may be, but the comedy is in short supply. It's almost as if the film is suffering from an identity crisis with nobody sure of which direction to take. Whilst the underlying plot of the film is an interesting one, reminding me of something along the lines of Groundhog Day, it never really gets out of first gear. It's always a bad sign whenever I start to watch a film and then find myself looking out of the window or flipping through the pages of a magazine.

The only redeeming feature about this film is Tony Shalhoub's excellent portrayal of Prophet Jack. After other great roles in Men in Black and the recent detective television series Monk, I was really looking forward to seeing his efforts here. It's just a crying shame that he spends so little time on screen as whenever he appears the comedy element so lacking in this film magically appears only for it to disappear, along with your will to live, once the screen returns to the completely out of place Jolie.

Like or Something Like It has been available on region one for sometime and the cynic in me would have to suggest that this region two release has been rushed through in order to coincide with the UK theatrical release of Tomb Raider II. I wouldn't mind so much if this film was actually worth watching, but with no extras there is little incentive to purchase this disc, even if Angelina Jolie does sport a platinum blonde hairstyle. Do yourself a favour, unless you are the world's big fan of Angelina Jolie, avoid this disc.