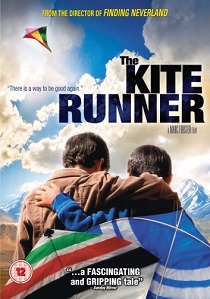 Amir is a young Afghan boy and part of a well-to-do family whilst Hassan is the son of Amir's servant Ali. Amir and Hassan form an unlikely friendship in Kabul and the boys spend their days in a peaceful Kabul kite fighting - a popular, and competitive, sport played by just about everybody in Kabul. Amir's father, Baba, loves both the boys. However, he often seems to favour Hassan for being more manly and someone who is prepared to stick up for both himself and Amir - often defending Amir with his slingshot. In one such altercation with local bully Assef, he stands his ground only for Assef to threaten him with revenge.

Although Amir has a keen interest in writing stories his father doesn't take much of an interest and is expecting more of him. Baba wants him to keep the family profile, and name, up and become to be a doctor or scientist instead. Never the less, he has a kind father figure in the form of Rahim Khan who understands Amir better than most and he continues to encourage Amir to write. However, a subject that everyone agrees on is that Amir is one of the best kite flyers around and hopes are high that he'll succeed in this years competition.

Hassan is the "kite runner" for Amir and he seems to have a gift of knowing where they will land. So when Amir cuts the final kite and wins the tournament, Hassan dashes off to fetch the kite Amir has cut. However, Hassan runs into Assef and his two sidekicks. Assef demands the kite, but Hassan refuses to give it up the precious prize so Assef starts to beat him up - and possibly sexually assaulting him in the process. While looking for Hassan, Amir approaches the group and, safely hidden away, watches the assault taking place without going to his aid.

After the attack Amir and Hassan both become emotionally downcast. Amir starts to spend less and less time with Hassan and he starts to feel guilty of being coward. He also worries that, should his father ever discover what happened, he might love Hassan more than him. So Amir decides it would be best that Hassan should leave, but when he suggests to his father that other servants should be hired he angrily refuses. But Amir has other ideas and frames Hassan as a thief - claiming his new watch has gone missing. So when Hassan falsely confesses, Ali and his father Hassan decide to leave, in spite of Baba begging them stay.

A short while later, the Soviets invade Afghanistan and, forced to flee Kabul ahead of Soviet troops, Amir and his father escape to the United States to pursue a new life. But years later Amir is still haunted by the guilt of betraying his childhood friend and, after receiving a phone call from an old friend, he returns to a Afghanistan suffering under the Taliban's iron-fisted rule. Once there he is forced to face his secrets and try to set things right. In doing so, Amir opens his heart as well as other family secrets with life-changing consequences.

Given the subject matter I was quite surprised to discover that the film had an estimated budget of $20 million dollars. This was no bargain bucket backroom production, although the quality of the image doesn't reflect this with a rather disappointing presentation. Whilst the different colours and detail appear to deliberately match the various locations in America and Afghanistan, there is a definite lack of colour depth and definition. Even the various kite flying scenes don't look particularly convincing and can't hide their CGI origins. As such, the image is very soft and, when viewed on a large screen, it all becomes a little grainy and gives the impression of being a rather low budget affair (which, whilst $20 million dollars isn't a remarkable amount of money for a film, it's certainly much larger that some better looking budget titles out there). Never the less, the transfer is clean and free from any signs of dust specks and other picture imperfections.

The 448 Kbps 5.1 Dolby Digital soundtrack is nothing spectacular and I guess the budget didn't stretch to too much in the way of extravagant post-production spending. However, given that this a dialogue heavy film you don't really expect too much in the way of dynamic effects and there can be no real complaints. Never the less, the actual kite runner contest - and specifically the kites battling it out in the sky - will keep your surround system busy for a while.

The only real issue with the quality of the audio is the level of the dialogue. At times, it becomes so inaudible that the volume has to be continually cranked up before anything can be heard (although, to be fair, unless you speak Dari Persian you're unlikely to find it too annoying really). Fortunately, unlike some other dramatic films, there are no sudden loud moments that cause you to dive for the remote so you can be fairly safe in the knowledge that, after a late night viewing, the neighbours will still be talking to you the following day.

Before you get to the menu you have to navigate through a number of trailers for forthcoming DVD releases. Fortunately, these can either be skipped through or bypassed complete by pressing the "Menu" button on the remote. The menu itself is animated and scored with the jolly tune used in the film during the kite running event whilst the sub-menus are static and silent affairs.

Extras wise, the main extra has to be the Audio Commentary with Marc Foster, Khaled Hosseini and David Benioff. As with most adaptations, it's interesting to hear Foster and Benioff talk with Hosseini about his novel and how they went about adapting for the cinema. Hosseini takes seeing his book on the big screen in his stride and even manages to provide plenty of extra detail about the film, including Afghanistan itself and China - its replacement filming location. Next up is the fourteen minute Words for The Kite Runner featurette. This looks at the book and how it made its tricky transition from book to the silver screen. Again, Marc Foster, Khaled Hosseini and David Benioff are on hand and they each talk about their interest in the story whilst an increasingly interesting Hossenini talks about how he became a writer.

Following on is the even longer twenty-four minute Images from The Kite Runner featurette. Since the previous featurette concentrated on the book, this featurette concentrations on the actual production of the film. With plenty of behind the scenes footage, it's another interesting and worthy viewing. There's also a short one minute Public Service Announcement with Khaled Hosseini. This can either be viewed before the film or accessed via the Extras menu. It's simply a brief introduction about the film but also an appeal for help on behalf of the people suffering back in his home country. Things are rounded off nicely with the Theatrical Trailer for the film.

Clearly, it would have complete madness to film The Kite Runner in Afghanistan (where cinema is probably some religious abomination worthy of a stoning) so it was far safer to film things in China - and a very convincing substitute it was too with the mountainous scenery and buildings making a worthy substitute. Also, around the time of the theatrical release, there were rumours of death threats against the child actors. Due to Afghan morels concerning male rape, the film company agreed to relocate (or more likely smuggle) the young actors out of Afghanistan to the UAE plus arrange visas, housing and schooling for the young actors and jobs for their guardians until they reach adulthood. Now, that's what I call an production overhead - with some estimating that the final cost will be up to $500,00 dollars!

Although the film spends most of its time as Dari Persian dialogue, there are a few moments when it seamlessly switches to English - not that you'd really notice. You see, like the other foreign language classic Cinema Paridiso, The Kite Runner is one of those few films that manages to keep your attention throughout the entire film which, given the requirement for English subtitles for the majority of viewing, is simply remarkable. Also, even though the film has a running time of just over two hours, you'll be so immersed in the film that you'd be hard pressed to notice that the time is simply flying by (no pun intended there!)

There's no doubting that this is a superb and powerful film and is worthy of multiple viewings. It's made all the better by some wonderful acting - especially from the younger members of the cast and a good collection of extras that add additional value to the overall package of the film. If you ever needed a film suggestion to help open up a whole new world of foreign language material then you can't get a better start than The Kite Runner. This is not a Hollywood no brainer or typical British rom-com, this is cinema truly at its best. Highly recommended.