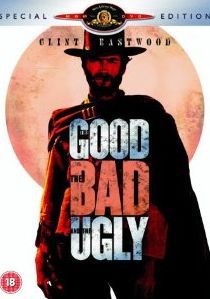 ReviewThrillerWar / WesternAdventureClint Eastwood
Review Article Go back to homepage
Set during the American Civil War, three mean desperadoes have their eyes on 200,000 dollars worth of confederate gold buried in a cemetery. But besides battling with a countryside blighted by war, they also have each other to contend with.
Clint Eastwood, Lee Van Cleef, Eli Wallach, Aldo Giuffre, Mario Brega, Claudio Scarchilli, Antonio Casale, Sandro Scarchilli, Benito Stefanelli, Aldo Sambrell
War/Western, Action/Adventure, Suspense/Thriller
2
2 Hours 51 Minutes
Thank you for supporting DVD365.net when you order using the link(s) below.
Buy DVD
Story

Two sharp shooting gunmen, Tuco and "Blondie" have formed a rather bizarre partnership. Tuco (the aptly named Ugly) is a wanted man across many states and a substantial reward hangs (literally) over his head. So his partner "Blondie" (the oddly title Good - after all, he is breaking the law too) turns up on the scene captures Tuco and then turns him in for the reward money. But once the hanging is about to take place, the traitor turns saviour by shooting the rope clean through and allowing Tuco to make his escape. They work their profitable scam from town to town (you would think that the authorities would have got wise to their scam by now) and only once safely away do they split their ill-gotten reward money.

But even the best of friends fall out from time to time, and they are hardly the best of friends in the first place, so when the pair fall out over the splitting of the latest batch of reward money Blondie abandons Tuco in the middle of the desert. Tuco vows his revenge, and after eventually finding his way out of the desert he tracks down Blondie and repeats the favour. But with Blondie's luck, and life, about to run out he is saved when a runaway wagon comes hurtling through the desert towards them.

When Tuco stops the wagon his discovers a dying soldier who promises to tell him the whereabouts of $200,000 in gold if he gives him some water. The soldier tells Tuco that the treasure is buried in a particular graveyard but with the soldier fading fast Tuco goes to find some water only to return to wagon to find Blondie and a dead soldier. So Tuco knows the graveyard, but only Blondie has been told which grave to look in. Tuco has no other choice but nurse help Blondie back to life. He can't terminate their partnership just yet and both men set out in search of a wealth beyond their wildest dreams. But they aren't the only ones with eyes on the treasure.

For a film rapidly approaching 40 years old the quality of the transfer is quite remarkable with some wonderful detail, superb clarity, sharp colours and a surprising lack of grain. And the majority of the congratulatory back slapping needs to go to Triage Laboratories who were responsible for the films restoration process. As one of the few companies that deal with obsolete formats, they used an original Italian theatrical Techniscope print which then opened up the possibility of creating a full restored American version of the theatrical release. But for all the effort put into the restoration, the picture can still suffer from the usual problems of print scratches and dust specks. Perhaps Triage could have performed a bit of digital wizardry to these problem areas to. Well, there's always the super-deluxe beyond the grave director's cut isn't there ?

With a restored picture a much bigger and fuller soundtrack was really required to do the film justice. It would have all sounded rather hollow if after all of the efforts made to improve the picture quality it remain in mono. Fortunately, the decision was made to provide a fully blown Dolby Digital 448Kbps soundtrack. But the process of converting the soundtrack into a something more dynamic wasn't going to be easy, especially when the sound effects and the musical score were on the same audio track. Although you'd be hard pressed to notice, a bit of trickery was employed to widen the soundtrack. In an attempt to avoid problems with phasing the sound engineers decided to add additional gun shots and explosions which weren't on original soundtrack.

But does it all work? Well in a way, yes. The dialogue is certainly crisp and clear enough in the centre channel and the superb muscial score is just as impressive. However, the surround channels are used sparingly and at a relatively low level too. There's also a reasonable attempt at improving on the stereo steerage with certain dialogue appearing in either the left or right front channels. Unfortunately, and as with the rear channels, the output levels are far too low when compared with the main dialogue in the centre channel. It's a shame really, as for what is an obvious attempt to improve a classic soundtrack, it doesn't quite hit the mark.

With the film running the best part of three hours it would only be natural for a special edition to be accompanied by a supplemental disc. And indeed there is one, with plenty of featurettes such as Leone's West and The Leone Style looking at director Sergio Leone's vision of the film with some interesting and insightful interviews with Clint Eastwood, Eli Wallach (and boy, have the pair aged!) and a number of film historians. Clint and Eli also reveal some interesting and life threatening events which, along with the usual disagreements with the director, helped make the film what is it.

Also included is a rather interesting featurette Reconstructing The Good, the Bad and the Ugly and a documentary about the historical background of the Sibley campaign, The Man Who Lost the Civil War. In addition, there's a two-part appreciation of composer Ennio Morricone, Il Maestro, by film-music expert John Burlinghame. Tuco's extended torture scene can be found here, along with a reconstruction of the fragmentary "Socorro Sequence", a French trailer and a photo gallery. Not a bad collection of extras at all.

The main film disc is not neglected either with film historian Richard Schickel providing an authoritative and engaging commentary. And if that weren't enough, there's also a German and French Dolby Digital 5.1 soundtrack along with 14 subtitle tracks. Both discs are also equipped with a number of pleasantly animated and scored menus, in either English, German or French, with various cut scenes and images of the characters merging into the background. And no menu would be complete without Ennio Morricone's unforgettable and haunting score.

The Good, the Bad and the Ugly was a defining moment in the history of cinema and was rightly heralded as the greatest Western of all time. The film boasts some excellent and suspenseful set-pieces and an unnerving battle for a bridge involving hundreds of extras. And let's not forget that final tense stand-off in the cemetery with some brilliant close-ups and a superb score which really helps add to the tension. You won't see a better stand-off situation than that.

There seems to be plenty of differing versions of The Good, the Bad and the Ugly knocking around on DVD these days so when this much touted Definitive Edition was released you'd be forgiven if you took it all with a big pinch of salt. However, owners of the original will still want to update to this much better and more insightful edition. Not only is the soundtrack finally presented in Dolby Digital 5.1, but it has 18 minutes of footage cut from the American theatrical release fully restored. And what's even better, most of it was only ever available in Italian so Clint Eastwood and Eli Wallach have returned to the studio and dubbed it into English. And if that doesn't make it worth while the investment then nothing will.

The only negative point to this special edition is the packaging. For some odd reason MGM thinks that special editions should be packaged in foldout paper Digi packs. So, along with their special editions of The Silence of the Lambs and Terminator you'll soon have a tatty and falling apart paper case. Mind you, there's nothing like a good marketing ploy to make you go out and buy another copy or will that super-definitive, never to be repeated, director's cut be out by then?