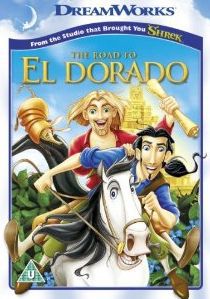 When two mischievous Spanish con artists Tulio and Miguel win a treasure map to the mythical cities of gold they decide to find a boat and set sail for the Americas. However, the maps losers discover that the dice were loaded against them and chase after the pair. Luck is still with the pair as they accidentally manage to hide on board a ship heading for the Americas on a gold hunting expedition.

However, the ship is captained by none other than Cortez, Spain's greatest conquistador, and he is not too happy to find a couple of stowaways onboard his ship. Tulio and Miguel are thrown in the brig and with the help of a most unlikely source manage to escape from the ship and find their way to land and start to look for the cities of gold.

When they accidentally stumble across the city of gold the inhabitants think that they are gods who have come to save them. As the pair are showered with more gold than they could ever imagine they are more than happy to play along. However, there is unrest in the city as an evil priest plans to use the pairs arrival as a sign to take over the city. Things are made worse when Cortez and his army lands and heads for the city. Do they stay in paradise and help the locals or do they head home in a ship laden with gold?

The picture is superb with a fabulous range of colours. There's also some amazing computer generated wizardry which manage to produce water and gold effects never before seen in an animated adventure. The bit-rate remains constant throughout and there's certainly no signs of any artifacting.

The sound matches the quality of the picture with some superb surround effects with the sounds of the jungle all around you. The musical score is also impressive, although the same bland songs from Elton John are starting to wear a little thin. His songs sound too much like the Lion King for my liking, but never the less they still add to the ambience of the film.

Disney really have got their work cut out as Dreamworks have become genuine contenders with some brilliant and original animated films. Where Fox failed, Dreamworks have managed to create some fantastic family entertainment with Kevin Kline and Kenneth Branagh playing off each so well. I also found the female lead, Chel, was worrying attractive for a two dimensional object. The mouse better watch his back, there's a new guy in town and he's got a mouse trap.