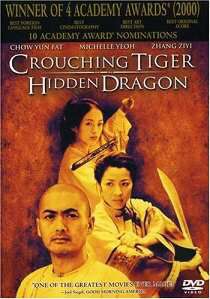 Li Mu Bai has become weary of the warrior life and has decided it's time to lay down his sword. However, it is no ordinary sword but the magical Green Destiny and he doesn't want to give it to just anybody.

He hands it to Yu Shu Lien, a woman he's loved for years, to take the sword to Peking for safekeeping. However, the sword is stolen and together with Yu Shu Lien, Li Mu Bai is forced to return to action and come face to face, not only with an old enemy, but with their forbidden love for each other.

The picture is reasonable enough, although overall I was disappointed with the quality. It has an average bit rate with no signs of artifacting or outlining but the picture transfer was below par. I lost count of the number of dust specks and other picture abnormalities. I just hope when it comes to the other region editions they tidy things up a bit.

The sound was also a bit of a disappointment. Although it is pretty much a dialogue intensive film the surround channels were neglected throughout the film. There was only the occasional atmospheric sound finding its way to the rears. Only the fight scenes are worthy of any note with plenty of swishing and crashing of swords echoing around the sound stage.

Fortunately there is no need to endure a foreign language film with subtitles as there is also an English Dolby digital soundtrack. However, for those who prefer to watch the film with its original soundtrack then the Mandarin is also in Dolby Digital so you can still hear all the action in glorious surround sound whilst reading the subtitles.

The extras are good enough with the usual trailer and music videos to accompany the film. There's also a directors commentary and behind the scenes featurette with Michelle Yeoh. With this volume of extras this disc has definitely been created for a wider western market. Only the dreaded region coding prevents this discs wider appeal to the American and European market. However, for those lucky people with region free players this does not pose too much of a problem.

Crouching Tiger differs from the usual stereo-typical view of a martial art film. They tend to associated with ridiculous story lines and slapstick humour sandwiched between the fight scenes. Although there's no slapstick here, there's still a tendency to keep meandering around the plot. However, the later half of the film certainly improves with some impressive scenery and jaw dropping fight scenes.

With a budget more accustomed to Hollywood, and with group of a-list actors, it really sets the new bench mark for martial art films to follow. With the immense box office takings for a foreign language film I'm sure we haven't seen the last of director Ang Lee. I just hope the mega bucks of Hollywood don't tempt him too much.