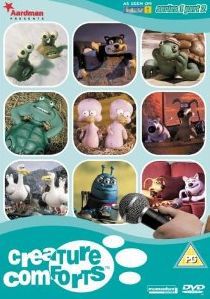 ReviewTV SeriesAnimationComedy
Review Article Go back to homepage
After the claymation of Creature Comforts launched the career of Nick Park, Frank the Tortoise and his friends are back for yet more hilarious interviews in part two of Creature Comforts.
The Great British Public
Comedy, Television, Animation
2
1 Hour 3 Minutes
Thank you for supporting DVD365.net when you order using the link(s) below.
Buy DVD
Story

The original Creature Comforts film was made way back in 1989 and in 1990 it went on to win Aardman Director, Nick Park, his first Oscar for Best Animated Short Film. This inspired the 'Heat Electric' television commercials in which various creatures from a Tortoise to a Jaguar were interviewed "documentary style" about the merits of owning electric storage heaters in their homes. These 'Heat Electric' commercials were released as a separate disc, but fortunately, for those too young to remember these adverts, the extras on this disc include the original grainy material.

Whether these adverts caused people to rush out and buy storage heaters is a different matter. However, they did succeed in capturing the imagination of the British public. And, mainly thanks to the BBC commissioning a one off animated programme, Nick Park went on to create three highly successful, and Oscar award winning, Wallace and Gromit adventures.

With his animation winning awards left, right and centre, it was only a matter of time until Hollywood came calling. And when they did, Nick Park and his company Aardman created the smash box office hit Chicken Run. Fortunately, fame hadn't gone to his head and it wasn't too long before he returned to his roots and produced another thirteen episodes of Creature Comforts for ITV. With series one already available, it was only a matter of time until the remaining episodes were released onto the shiny format.

You only have to watch the original Creature Comforts to see just how good the picture on the new material is. Naturally, with better technology and more money available it would have been a shock if the picture hadn't been up to scratch. Fortunately, it's excellent with an average bitrate and wonderful level of detail with a range of colours which only Aardman could dream up. If you've already seen the exploits of Wallace and Gromit then you already know what to expect. There are no signs of artifacting or outlining and the print is pristine with no dust scratches or other picture imperfections.

As the series was created for UK terrestrial television channel ITV1, the sound is presented in rather unexciting 192Kbps Pro-Logic stereo. However, considering that Creature Comforts was primarily created for television broadcast, the soundtrack was never really going to be that adventurous. With the soundtrack being dialogue intensive there is little or no need for any fancy effects, but what is offered is some clear and precise dialogue which can be easily listened to with or without the need for a fully blown home cinema sound system. Then again, Aardman must have had a DVD release in mind so they really should have come up with something a little better during production.

The menus are amusingly animated and scored with the option to play one or all of the episodes in one go. With many television based series released on DVD choosing not to use this facility, it's great to be able to sit back and watch the entire disc without having to continuously navigate through menus to get to the next episode. With the majority of the background information on the series revealed on the previous release it was going to be hard to find additional information for the second release. Fortunately, the extras offered on the second disc are reasonable enough and go some way to adding value to what otherwise would be a rather expensive DVD to buy.

Favourite Bits is a short featurette where, rather unsurprisingly, the director's choose their favourite bits from the series. Whilst this may not sound that interesting they still manage to provide some interesting snippets of information on their chosen scenes from the animation in the background to the masking out of unwanted sounds. The short Bringing Creature Comforts to Life featurette has already been covered on the first release, but this time there is a split screen with the directors acting out a number of scenes to assist the animators along side the final animated result. There are only three of these scenes, yet there's seven episodes on the disc. Whilst these scenes soon become rather annoying, it would have still been nice to see clips for each of the episodes.

Following on from the featurettes are two ITV channel idents, a number of PG tips adverts and a short, and rather funny, clip advertising the national television awards. You can also view the original, and rather grainy, 'Heat Electric' adverts which started Nick Park on his way. Quite why these couldn't have been tidied up at all is beyond me and it smacks of hurried cheap filler material. Finally, we have a small game where you need to match up the animal with the quote. Unfortunately, there are only three quotes to guess and you don't appear to get any reward for your efforts. Finally, there's some rather uninteresting wallpaper images and quotes on the DVD-ROM.

One of the things that makes Creature Comforts so good is the fact that the animal interviews (and even some of the background noises) were unscripted and unrehearsed. Even though the people being recorded knew it was for Creature Comforts, they still had to sound like real people and they didn't know what animals they were going to have their voices put to. It must of been great to hear yourself on television and then be equally horrified to see that they'd put your voice to a slug or flea. Mind you, I'm sure the voice of the hamster (the best character in the series) was particularly happy and the fact that your voice was used would certainly be a talking point down the pub.

Creature Comforts is an absolute hoot to watch. There's nothing like saving the best until last, and this second half of the series is most certainly the best. With the superb animation (is it really just stop-go clay animation?) and the various goings on in the background to the wonderfully unscripted stories from the general public, I don't think I've laughed so much in ages. I just hope ITV, or even the BBC, decide to commission another series of Creature Comforts.

Whilst there's no doubt that this is a fun DVD, and certainly much funnier that the first part, I would still have to question the rather high asking price of £17.99 for such a short disc. Ok, so you have the bonus of an additional episode and if you shop around then you aren't going to be paying anywhere near the RRP. But even so, it's still rather expensive for what is a moderately short disc. Fans are sure to buy, but it's still worth considering hanging on for the inevitable box-set containing both parts of the series. It may be slightly cheaper, and it may even have some extra goodies too.