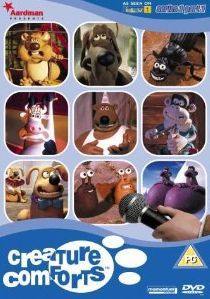 ReviewTV SeriesAnimationComedy
Review Article Go back to homepage
After the claymation of Creature Comforts launched the career of Nick Park, Frank the Tortoise and his friends are back for more hilarious interviews.
The Great British Public
Comedy, Television, Animation
2
1 Hour 3 Minutes
Thank you for supporting DVD365.net when you order using the link(s) below.
Buy DVD
Story

The original Creature Comforts film was made way back in 1989 and in 1990 it went on to win Aardman Director, Nick Park, his first Oscar for Best Animated Short Film. This inspired the 'Heat Electric' television commercials in which various creatures from a Tortoise to a Jaguar were interviewed "documentary style" about the merits of owning electric storage heaters in their homes.

Whether these adverts caused people to rush out and buy storage heaters is a different matter. However, they did succeed in capturing the imagination of the British public. And, thanks to the BBC, Nick Park went on to create three highly successful, and Oscar award winning, Wallace and Gromit adventures. With his animation winning awards left, right and centre, it was only a matter of time until Hollywood came calling. And when they did Nick Park and his company Aardman created the smash box office hit Chicken Run. Fortunately, fame hadn't gone to his head and it wasn't too long before he returned to his roots and produced some more Creature Comforts.

You only have to watch the original Creature Comforts to see just how good the picture on the new material is. Naturally, with better technology and more money available it would have been a shock if the picture hadn't been up to scratch. Fortunately, it's excellent with wonderful level of detail and range of colours which only Aardman can come up with. If you've already seen the exploits of Wallace and Gromit then you already know what to expect. There are no signs of artifacting or outlining and the print is pristine with no dust scratches or other picture imperfections.

As the series was created for UK terrestrial television channel ITV1 the sound is only presented as Pro-Logic stereo. Never the less it is still quite effective and pleasant enough to listen to. Naturally, the soundtrack is dialogue intensive and it is clear and precise in the centre channel. There's not really much use of the stereo or surround channels, but with it being television material it was never really going to be that adventurous. Fortunately, without the NICAM constraints it sounds far superior to the television broadcast.

The menus are amusingly animated and scored with the option to play one or all of the episodes in one go. Although the running time of the six episodes is rather short, coming in at just under an hour, the two documentaries on creating the characters increase the value of the disc by pushing the running time over the hour mark whilst the other extras will appeal to all members of the family.

Highlight of the extras must be the Creating Creature Comforts documentary which takes you behind the scenes of the animation and audio recording processes. Whilst it's not as revealing as I would have liked, its still manages to be factual enough to make it quite interesting. The second documentary is a rather short feature where, along with a few storyboards, the director and animator have videoed themselves acting out the dialogue to the pre-recorded voices. It's essentially a reference to help them design the characters. It may only be short, but it's just enough to get the idea without becoming annoying.

Next up is a small game where you need to match up the animal with where they live or work and the original Creature Comforts short. There's also a trailer for a rather good looking Wallace and Gromit platform game and a pointless bit of filler material with the trailer for the DVD. However, one surprising omission is a set of subtitles for the hard of hearing. I'm sure the terrestrial broadcast would have had subtitles so quite why they haven't been carried forward to the DVD is puzzling. Finally, there's some rather uninteresting images and sound bites on the DVD-ROM.

One of the things that makes Creature Comforts so funny is that the animal interviews were unscripted and unrehearsed. Even though the people being recorded knew it was for Creature Comforts voices, they still had to sound like real people and they didn't know what animals they were going to have their voices put to. Mind you, neither did the creators and after listening to the voices they pictured what the animal should look like. Keen viewers may also recognise some voices from the original series whilst some of the animals interviewed look remarkably like characters out of Chicken Run and Wallace and Gromit.

Whilst there's no doubt that this is a fun DVD, I would have to question the asking price of £17.99 for such a short disc. This becomes even more questionable when you consider that it is part one of two. Ok, if you shop around or order on-line then you aren't going to be paying anywhere near the RRP, but even so it's still going be rather steep for what it is. Fans are sure to buy, but it's probably worth while hanging on for the inevitable box-set containing both parts of the series. It may be slightly cheaper too.