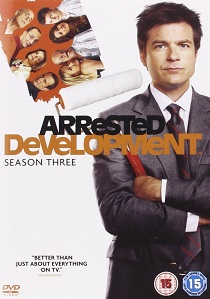 Arrested Development Season 3 kicks off with "good son" Michael Bluth, a widower with a 13 year old son, visiting his father in jail for the first time in three months. The Bluth Developing Company is bouncing back from bankruptcy and the shifty accounting practices that put his father in jail in the first place, but before Michael can break the good news he realises that it is actually his dad's brother Oscar behind bars. George Sr. escaped his incarceration in Season 2 when the wrong twin was arrested, so Michael decides to head off to hunt for the real one with son George Michael in tow.

The rest of the Bluth family remain as dysfunctional as ever, with magician Gob going on the run from his newly-discovered teenage son Steve. Flighty Lindsay, and her sexually confused husband Tobias - with even more bizarre uses for his false hand - both fall for the family's new lawyer, Bob Loblaw. However, it doesn't take too long before Bob gets a little disturbed by their advances and decides to stop representing the family. Also, George Michael and Maeby share their first kiss whilst the scheming and intoxicated matriarch Lucille continues to try and rule over her children with an iron fist.

With guest performances from the likes of William Hung, Judge Reinhold, Andy Richter, James Lipton, Justine Bateman, Charlize Theron and many more, Arrested Development truly goes out in a blaze of glory - and boy, does it take that glory award with gusto.

For a television series the level of detail is very good. The transfer is clean and precise with very few of the problems with either edge enhancement and grain - an issue that can plague many a television to DVD transfer. Colours are rich and vibrant and the various blacks and contrast levels in both the interior and bright exterior locations well balanced throughout. Whilst it won't challenge a big budget Hollywood blockbuster, the quality of the above average bit-rated transfer is certainly more than adequate for a television series.

The 192Kbps Dolby Digital Stereo 2.0 soundtrack is nothing special - but then again, we're all pretty much use to this sort of thing from any television series released on DVD from Twentieth Century Fox. Still, you can't really complain too much, especially since the material was created for television broadcast. After all, the sound from a series such as this is hardly going to give your surround system a massive workout, even if the musical score is quite a foot tapping tune - and who would have thought a ukulele based theme song would be so catchy?!

The menus across both discs are animated with graphics and include a number of cut scenes from the programme. They also manage to be scored with the theme music, whilst even the sub-menus manage to provide a different score to the main menu. Extras wise, they are spread over the two discs with a large collection of deleted scenes and audio commentaries to keep the eager - but ultimately crestfallen - fans happy.

The main extra on the disc would have to be the rather funny, but ultimately rather pointless, Audio Commentaries by series creator Mitchell Hurwitz, actors Will Arnett, Jason Bateman, Michael Cera, David Cross, Tony Hale, Portia de Rossi, Alia Shawkat and Jessica Walter on the Forget Me Now, Mr. F, and Development Arrested episodes. Running for around fourteen minutes, a selection of Deleted and Extended Scenes are also available across the two discs. I can only assume that they were deleted for timing purposes as there was really very little of note - with some cut scenes longer than others - although the extended scene with Judge Reinhold is quite amusing.

Next up are six minutes worth of Blooper Reel. Whilst it is mildly amusing at times, and it also manages to show just how well everyone appeared to get on, there's only so many sniggers, curses, wind and daft dances a person can take in one sitting. Finally, the extras on the second disc are rounded of with the seven minute The Last Day on Location featurette. Whilst it offers nothing special on the behind-the-scenes front, it contains an interview with Jason Bateman and is probably more notable for the rather sad looking cast members and Will Arnett welling up as he thanks the cast and crew for their efforts on the series.

Winner of the Outstanding Comedy Series Emmy award, Arrested Development is the kind of programme that gives us all hope for television - and especially American television where satire seems to be a subject that should be avoided at all costs. As a mockumentary it - thankfully - doesn't resort to a laughter track or a bemused studio audience to spoil everything, although, as both a reviewer and eager viewer of just the third series it makes it rather difficult to work out just what the heck is happening. Mind you, one thing is for sure - it's pretty darn funny entertainment.

However, for such a ground breaking - and much acclaimed - series such as Arrested Development, it didn't take long for Twentieth Century Fox to cancel it. As usual, the rather surreal comedy flew over the American viewers heads - which is a little odd considering they like Monty Python so much. So, along with other acclaimed American series, such as Dead Like Me, it was cancelled mid season. As a result, season three only contains thirteen episodes. Fortunately, the writers did their level best to conclude the series in the best way they could without affecting the comedy content - with the various spoofs on James Bond being particularly amusing. They even go to great lengths to poke fun at the British. Ordinarily, I would be quite offended by this, but in this instance I couldn't stop myself laughing at the daft one liners and hilarious visual gags.

In fact, with so many laughs to be had, if this season is anything to go by then the previous two seasons must be a total hoot and a must view too. Definitely a case of the series writers being on a bit of a creative roll. Still, on hearing about the cancellation, some writers could have simply said "stuff it" and walked off in a huff to their next highly paid job, but in this instance they continued to be creative until the end. Never the less, that doesn't mean they weren't bitter as the S.O.B episode does contain a number of thinly-veiled attacks on Fox - but then again, The Simpsons is always pretty keen on poking fun at their pay masters too.

The only downside to this release is the actual cost of the final boxset. Whilst the other two seasons contained the full season episode complement - and all spread over three discs - the shortened two disc season three swan song is a little expensive when compared with the other two. Fortunately, if you shop on-line then the savings are considerable - it's just a pity that the excessive pricing takes the shine off what is the near perfect entertainment package. If you like to laugh, you'll love Arrested Development. Highly recommended.