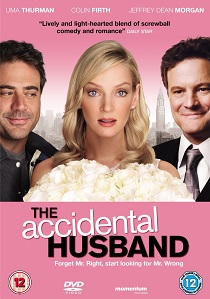 Dr Emma Lloyd is a popular New York radio DJ whose sensible and practical advice is listened to and loved by women all over the city. Off-air, her own life is just as successful with wedding plans to her dependable, charming and debonair fiancé Richard running smoothly and to plan. That is, until she makes a shocking discovery whilst getting her marriage license - she's already married and, worse of all, it's to someone she's never even met. Unfortunately, for the rebellious, charmer of a New York fire-fighter Patrick Sullivan, Dr. Emma Lloyd's words were taken to heart by his fiancée Sophia who, after calling her show for some marriage guidance, suggested that she break off her engagement to Patrick - which she swiftly does.

Naturally rather upset by her advice heard my millions of listeners (including some of his friends who instantly get new sources of fun poking material for many years to come), Patrick decides to give Dr. Lloyd a taste of her own medicine. So with the help of one of his friends - who just happens to be a bit of a whizz on a computer, they hack into the city computer system and create a wedding certificate and - hey-presto - Dr. Emma Lloyd is now the unwitting "loving" wife of one Patrick Sullivan.

Given that being married to somebody else before your wedding is a bit of a snag, Emma decides that the best thing to do is to get the married annulled. However, this requires the signature of her "husband" so Emma sets out to track down her mystery man. When Emma finally tracks down Patrick, he's determined to make her life as difficult, and embarrassing, as possible by delaying the signing of the annulment and gate crashing numerous events she attends. But, as events unfold, Emma discovers that following her own advice is a lot more difficult than she anticipated and she starts to wonder whether Richard is really the right choice for her.

The picture is bright and colourful with plenty of detail and colour depth. The interior and exterior scenes are handled with ease and some of the more colourful wedding moments are rich and inviting to the eye. The above average bit-rate also provides a clean, albeit slightly grainy at times, picture that exhibits no signs of artifacting or outlining. The transfer is also free from signs of print damage or dust specks but, given that this is such a recent release, I wouldn't have expected anything else.

The 448Kbps Dolby Digital 5.1 soundtrack offers very little in the way of excitement. Sure, this is a rom-com with very little requirement for anything explosive or ground shaking in the effects department, but since the rear channels were silent throughout the film, I still kept having to check whether my surround system was turned on and configured correctly. Never the less, even without any signs of effects, the dialogue is crisp and clear in the centre and front channels. Whilst it's certainly functional for the genre of film, it's always disappointing to hear a rather flat and dull soundtrack.

Once you get past the trailers for the rather poor looking Miss Pettigrew Lives for a Day and Hamlet 2 films, you are greeted with a rather boring static and silent menu system. Also, given that this is film aimed at a female audience, Momentum have decided that those girlie types will be far more interested in the shoes and clothes to be bothered with any extras. As such, this disc is devoid of extras - although there are some subtitles (which I refuse to count as extras). Given that this is such a recent film, with high profile actors, I'm very surprised that there's nothing on offer here - even the humble Theatrical Trailer would have been better than nothing!

Goodness, with a film released just in time for the all important Valentine's day market, it's rather hard finding any sort of moral in the film. You've either got the rather good advice of "if you don't really love someone it's OK not to marry them" or "it's OK to hack into a computer, stork someone and ruin their life". But, I guess with Hollywood being Hollywood, it's perfectly OK to do whatever they like to make the impossible the improbable. I'm not sure whether I was suppose to be offended or impressed by the film, but either way, I wouldn't have thought it was the most ideal of films to watch whilst cuddled up on the sofa together.

With the Accidental Husband being a cross between Sex and the City and Sleepless in Seattle, it's not hard to work out the target audience. The question is, will the ladies be cheering for Dr. Emma Lloyd or hissing at Patrick Sullivan? Also, with the likes of the pretty awful My Super-Ex Girlfriend under her belt, just what sort of films is Uma Thurman signing up for these days? With poor films such as this, she really should be questioning either her judgement - or her agent. It's hard to believe that she's gone from kicking some ass in Kill Bill to these sorts of films where the chemistry between the characters is almost none existent.

There's plenty of rom-coms out there, but for me at least, come the end of the film I couldn't stand any of the characters. Still, I guess it's another film where where the men folk should stay well clear and eat their Yorkie bar (it's still not for girls) in private. I'm not even certain that women shouldn't give it a wide birth either - even if they've got a thing for Colin Firth or Jeffrey Dean Morgan. Proceed with caution for this one.