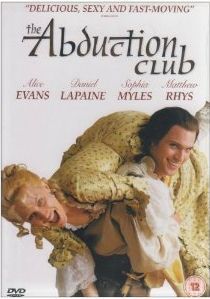 During the 18th century in Ireland it was the law that the eldest son inherited all of the family estate. Whilst this more that satisfied the eldest son, any other siblings were naturally all rather peeved at inheriting absolutely nothing. However, there was a way out. They could always find an heiress of their own to marry. Mind you, its not every day a rich heiress could be found and married, so the "Abduction Club" was formed to assist in the long winded road of courtship.

The Abduction Club sounds much worse than it is, and there are strict rules so that the members don't go overboard. Although a young lady would indeed be abducted by a group of club members, each man would have just one night to charm their chosen heiress into a marriage. If they agreed then a priest would be on hand to perform the necessary marriage duties, whilst if they refused the girl would be returned safely to her family home with her honour intact. It's not quite a Friday night at the pub thing.

Byrne and Strang are two such members of the club and it is their turn to woo a bride. After setting his sights on the beautiful but headstrong Catherine Kennedy, Byrne sets the kidnapping plan into action. However, the abduction doesn't all go to plan and both Catherine and her younger sister, Anne, end up being kidnapped. Whilst the younger and more adventurous Anne is pleased to go along with the proceedings, Catherine is far from happy and is going to be a tough one to charm.

Never the less, Byrne sets about his task of attempting to charm her into marrying him whilst Strang has been tasked with keeping Anne occupied. However, the two girls are hotly pursued by John Power, a Kennedy family friend, who wants Catherine for himself, and he'll even resort to murder to get what he wants. Byrne and Strang soon find themselves fighting for their lives whilst Catherine's opinion of Byrne is finally starting to change.

The picture is bright and colourful with a reasonable amount of detail and a bit-rate which remains above average throughout. Although there were a few occasions when the picture could be a little grainy, there were no signs of either artifacting or outlining. The print is also clean and free from any dust scratches or other picture imperfections. All in all, it is of a surprisingly high quality.

Although the soundtrack is not going to be testing a surround sound system to its full potential, there are still plenty of atmospheric effects in the rear channels and some clear and precise dialogue in the centre channel. I wasn't really expecting too much in the sound department, but I ended up being pleasantly surprised by its all round performance.

The copy of the film I received to review was only the rental version and contained no extras and had a static and silent menu system. However, the consumer edition of the film is not totally barren of extras as it contains a solitary theatrical trailer. Although the extras are on the poor side, I suspect that this is the best we could ever get from this film. After all, it was made on a shoestring budget and I'm sure little thought went towards the eventual retail market.

Overall, Abduction Club is a pleasant Sunday afternoon style film which can be enjoyed by all. It all hangs together so well that you could almost be watching one the many award winning BBC period dramas. However, this should certainly not be taken as a criticism, more of a complement to the entire cast and crew. The only down side would have to be the lack of extras. Mind you, since it sells for around ten pounds you actually have very little to complain about.

What's even more intriguing is that the film is inspired on real events which occurred in 18th century Ireland. Now, if only I could find a country estate, a horse and a fair maiden…