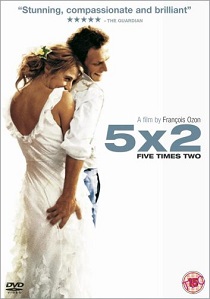 ReviewDramaRomance
Review Article Go back to homepage
Watch as the five stages in the romance between a woman and a man, from the initial meeting to the final throws of their marriage at the divorce court, are dissected by the camera.
Valeria Bruni Tedeschi, Stéphane Freiss, Géraldine Pailhas, Françoise Fabian, Michael Lonsdale, Antoine Chappey, Marc Ruchmann, Jason Tavassoli, Jean-Pol Brissart
Drama, Romance
2
1 Hour 27 Minutes
Buy DVD
Story

The story begins at the chronological end as Marion and husband Gilles finalise their divorce proceedings in a sterile municipal office. All the usual depressing things occur, such as the agreements on access rights to their child and the splitting of property and assets. And so with two signatures on a set of papers, their marriage has ended and they are single once again. But how did it come to such a terrible end? All will be explained as we trace their journey down a road to their ultimately not-so blissful union. Shown as four revealing flashbacks, and in reserve order, their journey commences with the first tentative signs of a break-up back to their initial meeting on a sun drenched beach in Italy.

The next scene is of Marion's pregnancy and the troubled birth of their son Nicolas. When a scan reveals that the placenta is obstructing Marion's birth canal and preventing the baby from growing so the doctors decide to induce the birth. It's all fairly routine and nothing too much to worry about, but when Marion rings Gilles to tell him of his impending fatherhood, rather than dashing to the clinic he carries on with his day as per normal, even going for some lunch, trying for over three hours not to be at Marion's side. Is he terrified of the birth, does he not want the child, or is he simply scared of his impending fatherhood?

Rewind a little further and we arrive at Marion and Gilles' wedding day, the evening reception and a much happier time. But even then there's signs of trouble ahead, but not from the possibly philandering Gilles either, as laid flat out in bed and too exhausted and drunk to perform the marital tradition on their wedding night, Marion heads out for a walk only to be met by an American (it's always with the dastardly Americans!) and a late night encounter that she won't be forgetting in a hurry. Never the less, come day break she dashes back to the bridal suite and confesses her love to her still slumbering husband.

The final scene is that of their first meeting on a sun drenched beach in Italy. Although Gilles is already holidaying there with his current girlfriend there is a definite spark between Gilles and Marion and when his rather jealous girlfriend goes off trekking in the hills surrounding the hotel the two of them find themselves on the same secluded beach and swimming in the sea together. As the sun sets on a wonderful day it all seems like the beginning of a long and happy relationship together.

The picture is bright and colourful with plenty of detail and reasonable amount of colour depth. The above average bit-rate provides a fairly clean picture with a few signs of outlining and outlining. However, during some of the brighter and night time scenes there is a slight problem with grain and lack of depth to blacks. The problem is made all the more worse by watching on a large screen television where things can end up looking rather messy indeed. Still, I expect that the relativity small budget may have been a defining factor in this. On the plus side, the print appears to be clean with no signs of any dust scratches or whiskers. The subtitles are also rather annoyingly burnt onto the image so even if you can speak French you're stuck with the subtitles. Quite why this couldn't have been supplied as a subtitle track is beyond me. After all, that's what the facility on the DVD is for!

Given that this is a French film with the dialogue in French, unless you speak French the sound, and especially the dialogue, is not going to be too important to the proceedings. However, the dialogue on this 448 Kbps Dolby Digital soundtrack is clear and well presented in the centre channel whilst the musical score is just as effective in the front and centre channels. On the down side, there was very little use of the surround channels with, rather oddly, only the Wigfield "Saturday Night" floor filler finding its way to the rears during a disco scene. Still, it's hardly the sort of film which requires such things.

The menu is scored and simply animated with cut scenes from the film whilst the subsequent menus are static but scored with the same music. Some of the extras are surprisingly interesting, with a Making Of featurette which goes well and truly behind the scenes at the wedding party, plus a good selection of deleted scenes. Unfortunately, the rest of the extras are a bit of rather poor pieces of padding material.

The main extra is the sixteen minute Making of Featurette. Concentrating on the wedding party scene, and again with burnt on subtitles, director François Ozon is seen frantically setting up the scene, grumbling at the extras starring into the camera and attempting to get the best out of his actors. Details wise it's hardly the most interesting of featurettes, with little or no information on the actual film, but from a "fly on the wall" perspective it's actually very interesting to watch the filming process and it's almost as if you're on set with the production team. Next up are seventeen minutes worth of Deleted Scenes. Split into five chapters, the scenes play in the same reverse order to the film, with the start of the divorce right through to their first meeting in Paris. As the film is not overly long, or fast paced for that matter, I'm not too sure as to why they were not used in the film. Still, it's nice to see them here.

Next up are four minutes worth of stills from the film set to music. Although you can pause the feature I'd much rather see these sort of extras as single frames which can be moved forwards and backwards at will. Also, they have a rather bizarre arty frosted effect which doesn't half spoil things. Finally, rounding things off we've got the Theatrical Trailer for the film and a number of other Pathé titles Bombon El Perro, The Edukators, Swimming Pool, Look at Me and Intimate Strangers. Although some of the extras do disappoint, the Making Of and the Deleted Scenes do add some additional value to what is already a rather excellent film.

To be honest, I'm not the biggest Francophile there is, but when it comes to making films I'll quite happily acknowledge that the French can come with up with some outstanding films, with Nikita, Betty Blue and Rififi being some classic examples. And 5x2 can now be safely classed as one of those remarkable films that Hollywood so desperately needs to find a way to reproduce. Ok, so the film's Momentum style is no longer that unique, but in this case it works wonderfully well.

The only real disappointment is the state of the disc. The French version is equipped with a DTS soundtrack, the picture quality is not the best around and those burnt on subtitles are a tad too big and annoying. But I guess with such a limited audience it would be hard to justify spending too much on a title such as this. Still, as a critically acclaimed title, with nominations at The European Film Awards and The Venice Film Festival, where actress Bruni-Tedeschi was awarded the Pasinetti Award for Best Actress, it's just a pity that Pathé have decided to treat foreign language films with such contempt. After all, if Artsmagic can produce some outstanding results with their Eastern cinema titles, why can't anyone else?

It's not very often I give a full set of thumbs to a foreign language film, especially a French one at that, but credit where credit is due, this is an absolute cracker of a release and even with its failings it still well worth checking out. Highly recommended.