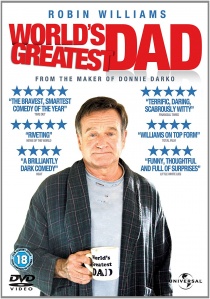 Sundance Film Festival hit World's Greatest Dad (from the maker of Donnie Darko), is the "most daring black comedy of the year" (Daily Mail) and is out on DVD on 31st January 2011, courtesy of Universal Pictures (UK).

Unpublished author Lance Clayton (Robin Williams) is a hapless single father who has let life pass him by and his dreams of being a rich and famous writer have dispersed into the reality of being a high school poetry teacher. Lance has surrendered to life and learnt to settle with second best. His only son Kyle (Daryl Sabara) is an insufferable teenager who won't give his father the time of day. Then, in the wake of a freak accident, Lance suffers the worst tragedy and the greatest opportunity of his life. He is suddenly faced with everything he ever dreamed of, if he can only live with the knowledge of how he got there.

World's Greatest Dad is a dark comedy which tackles the trials and tribulations of a father-son relationship, teenage angst, coping with loss, an innate curiosity for infamy and ultimately the importance of a tragic occurrence and how it can turn someone's life upside down.