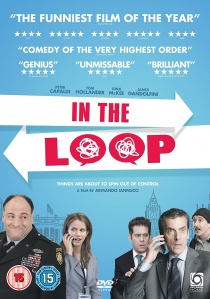 In The Loop, out to own on DVD and Blu-ray from 24th August 2009 from Optimum Home Entertainment, is the razor-sharp political comedy satirising the inner mechanics of the 'special relationship' between London and Washington is the talked about British film of the year.

A devastatingly sharp, foul-mouthed political comedy from the reigning king of satire, writer and director Armando Iannucci (The Thick of It, The Day Today, Knowing Me, Knowing You with Alan Partridge), In The Loop creates a world in which the US President and UK Prime Minister fancy a war, but not everyone agrees that war is a good thing.

US General Miller (James Gandolfini) certainly doesn't think so and neither does the British Secretary of State for International Development, Simon Foster (Tom Hollander). But when the mild-mannered Minister inadvertently appears to back the war on prime-time television, he immediately attracts the attention of the PM's venomously aggressive communications chief Malcolm Tucker (reprised from The Thick of It by Peter Capaldi), who latches onto him like a hawk.

Soon, the Brits are in Washington, including Foster's new aide Toby (comedian Chris Addison), whose inept attempts to preserve his job are matched only by his hapless bid to sleep with US intern Liza (Anna Chlumsky), herself an ambitious intern to paranoid US Assistant Secretary for Diplomacy Karen Clarke (Mimi Kennedy). Meanwhile, the minister's efficient and thoroughly skeptical Director of Communications Judy (Gina McKee) has been left behind in London to deal with the breaking story of an angry constituent and his collapsing garden wall (Steve Coogan). It soon becomes clear that the light at the end of Simon Foster's tunnel is likely to be an oncoming ballistic missile.

In The Loop is shot in a pseudo-documentary style, incorporating Iannucci's infamous improvisational techniques, creating an unforgiving, lightning-fast comedy peppered with razor-sharp expletives, which gives a frighteningly uncomfortable sense of how things really might be. The film reunites the award-winning writing team behind The Thick of It, bringing together writers Armando Iannucci, Jesse Armstrong, Simon Blackwell and Tony Roche, producer Adam Tandy with film producer Kevin Loader.

BD
Four years after South Korea's total decimation in Train To Busan, the zombie outbreak thriller that captivated audiences worldwide, the next nail-biting chapter in the post-apocalyptic world Train to ... END_OF_DOCUMENT_TOKEN_TO_BE_REPLACED
Hot PicksView