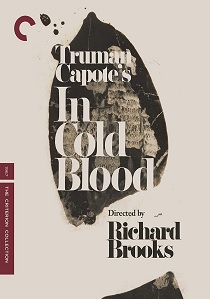 In Cold Blood: The Criterion Collection (1967)

Truman Capote's a breakthrough narrative account of real-life crime and punishment, became an equally chilling film in the hands of writer-director Richard Brooks (Cat on a Hot Tin Roof).

Cast for their unsettling resemblances to the killers they play, Robert Blake (Lost Highway) and Scott Wilson (The Great Gatsby) give authentic, unshowy performances as Perry Smith and Richard Hickock, who in 1959 murdered a family of four in Kansas during a botched robbery.

Brooks brings a detached, documentary-like starkness to this uncompromising view of an American tragedy and its aftermath; at the same time, stylistically In Cold Blood is a filmmaking master class, with clinically precise editing, chiaroscuro black-and-white cinematography by the great Conrad L. Hall (American Beauty), and a menacing jazz score by Quincy Jones.

In Cold Blood is given the Criterion treatment and released on Blu-ray 4th April 2022 from Sony Pictures Home Entertainment.