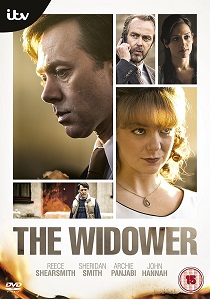 The Widower, released on DVD by ITV Studios Home Entertainment on 7th April 2014, is three-part ITV drama about real-life killer Malcolm Webster and the crimes he committed in the 1990s.

When his wife Claire (Sheridan Smith) becomes suspicious about unpaid bills and credit card debts, Webster (Reece Shearsmith), at the time working as a nurse, poisons her and deliberately crashes their car, setting it on fire and leaving her inside. Three years later he marries Felicity Drumm (Kate Fleetwood) in New Zealand and soon after begins plotting her murder in order to receive money from forged life insurance policies. His plan fails, however, and with Felicity now aware of Webster's true nature, he leaves the country and moves onto a potential third victim, Simone Banarjee (Archie Panjabi).

Related Articles
Next of Kin, San Andreas, The Good Wife: Season 3, A Good Year
League of Gentlemen: Anniversary Specials, Inside No. 9: Series 3, Inside No.9: Series 2, Inside No.9: Series 1, A Field In England, The Psychoville Halloween Special, Psychoville: Series 2, The Cottage, The League Of Gentlemen's Apocalypse, Inside No.9: Series 5, Inside No.9: Series 6, In The Earth, Inside No.9: Series 7
The Marker, Another Mother's Son, Alleycats, A Midsummer Night's Dream, A Touch of Cloth, The Mummy Returns, Overboard, Sliding Doors: 21st Birthday, The Victim, The Intergalactic Adventures of Max Cloud
Little Boy Blue, Cilla, The Hatton Garden Heist, White House Farm Murders
Black Work, Cilla, Benidorm: Series 6, The 7:39, Dates, Jonathan Creek: The Clue of The Savant's Thumb, Quartet, Tower Block, Two Pints of Lager and A Packet of Crisps: Series 9, The More You Ignore Me, Cleaning Up, Care, The Queen's Corgi
Victoria: Series 3, Harlots: Series 3
Oranges and Sunshine
Comments
UHD Releases News Pick