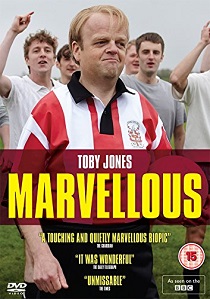 Marvellous, released on DVD and Blu-ray on 8th December 2014 by Spirit Entertainment Limited is the extraordinary true story of Neil Baldwin as he overcomes early obstacles in life to embark on a journey that leads him to many fascinating encounters.

Neil Baldwin, is considered to have learning difficulties but he has an appetite for life and, encouraged by his mother Mary to join the circus as Nello the Clown, being undaunted when the circus moves on without him. He moves to Keele University, where Mary has a cleaning job, appointing himself the unofficial greeter to new students, a role rewarded by an honorary degree in 2013. He also gets to manage its unofficial football team, named after him, and in 1992 talks his way into becoming the kit man and mascot of his beloved football team Stoke City.

For Neil there are no boundaries - his interest in religion leads to his becoming a lay preacher whilst he presents himself at the House of Commons for tea with MP Tony Benn and at Cambridge University, where he strikes up a friendship with Prince Andrew, which results in his being on the queen's Christmas card list.

With his indomitable attitude overcoming early set-backs and the death of his beloved mother for Neil life is marvellous.