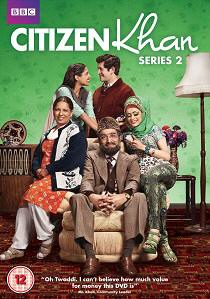 Mr Khan returns in a second series of this groundbreaking family-based sitcom following the trials and tribulations of the loud-mouthed, tight-fisted, self-appointed community leader and 'businessman' Mr Khan and his long suffering British Muslim family.

Citizen Khan was created by and stars the actor, radio and TV presenter Adil Ray, alongside Shobu Kapor (EastEnders) and the late comedian and actor Felix Dexter (The Fast Show, The Real McCoy). The second series of Citizen Khan is out on BBC DVD on 11th November 2013, following its premiere run on BBC One.

This series there's trouble in the air when Mr Khan has to take desperate measures to enrol his daughter Alia at the local college and unwittingly sets himself up on a blind date. Plus, in a Pakistani-Muslim television first, there's a Christmas special, and typically Mr Khan is determined to do things on a shoestring.

Citizen Khan's Mr Khan has previously featured as a character in BBC Two comedy series Bellamy's People and on Radio 4's Down The Line. The series was developed as a sitcom by writers Anil Gupta and Richard Pinto with Adil Ray and was produced by Paul Schlesinger. Citizen Khan (Series 2) is out on BBC DVD on 11th November 2013 and is available to pre-order.

UHD
The end of the line is only the beginning in a wild, non-stop thrill ride through modern-day Japan as Bullet Train is released on DVD, Blu-ray and 4K UHD 24th October 2022 from Sony Pictures Home Entertainment END_OF_DOCUMENT_TOKEN_TO_BE_REPLACED
Top PicksView