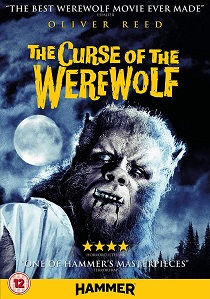 Based on Guy Endore's The Werewolf of Paris and directed by legendary horror filmmaker Terence Fisher, this classic, stylish feature set in 18th Century Spain represents Hammer at its early best.

BAFTA-Award nominee Oliver Reed stars as a man with brutal and macabre beginnings; the title curse resulting in savage, violent behaviour during a full moon. The only relief from his murderous impulses comes from the love of Christina (Catherine Feller)... but he soon begins to fear that even this cannot contain the beast within.

The Curse of the Werewolf is released on DVD 27th January 2020 from Kaleidoscope Home Entertainment.

Related Articles
The Man Who Could Cheat Death, The Hound of the Baskervilles, Frankenstein And The Monster From Hell, Dracula , The Curse Of Frankenstein
Dr. No
The Brood, Lion of the Desert, Oliver! Special Edition, Gladiator, Gladiator : Extended Edition
Jason King: The Complete Series Special Edition
The Frightened City
Comments
UHD Releases News Pick

UHD
With all the heart and humour audiences expect from Walt Disney Animation Studios, Big Hero 6, released on 4K UHD for the first time 30th August 2021 and exclusive to Zavvi, introduces you to a ... END_OF_DOCUMENT_TOKEN_TO_BE_REPLACED
Top PicksView