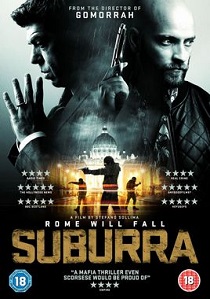 From acclaimed director Stefano Sollima (Gomorrah, Romanzo Criminale and the forthcoming Sicariosequel, Soldado), based on the novel co-written by Carlo Bonini & Giancarlo De Cataldo, Suburra takes place over seven days leading up to an 'Apocalypse' as a former crime boss, known as 'Samurai', is instructed by corrupt Mafia families to use his influence to help turn the waterfront of Rome into a new Las Vegas.

As the countdown to the 'Apocalypse' draws to a close, secrets are quickly unravelled as increasingly powerful gangsters become caught in the crossfire. As the city begins to crumble, all those involved must choose to sink or swim by betraying those closest to them.

Suburra is released on DVD and Blu-ray by Kaleidoscope Home Entertainment on 5th September 2016.