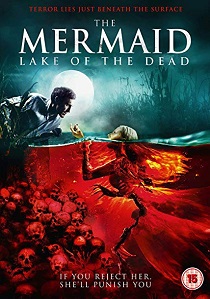 The seaweed is certainly not always greener in this particular lake. The Mermaid: Lake of the Dead begins with a mermaid falling in love with a human, but that's where the similarities with Hans Christian Andersen's classic tale end, instead taking a terrifying twist as she instead aims to keep him underwater in her Kingdom of Death while his fiancé must overcome her fear of water in order to save his life. Creepy, haunting and packed with jump-scares, you'll never feel safe to go back in the water.

Russian director, Svyatoslav Podgaevskiy, has put out some fun, frightening, horror films in recent years, with Queen of Spades: The Dark Rite and The Bride both terrifying international audiences, and with Baba Yaga: Terror of the Dark Forest set to follow later this year.

In between, however, he's released The Mermaid: Lake of the Dead: a splash of scariness that will have audiences diving for the nearest cushion to hide behind.

Visually stunning with gorgeous effects, the film explores the darker side of the mermaid legend - luring men to their deaths with their supposed beauty - which has been somewhat lost over the last few decades thanks to an iconic animated film.

The Mermaid: Lake of the Dead is released on DVD 22nd July 2019 from 4Digital Media.

BD
In a touching black and white film directed by Mike Mills, starring Joaquin Phoenix, C'mon C'mon, released on DVD and Blu-ray 28th February 2022 from Entertainment in Video, explores family, grief, and the bonds that bring us ... END_OF_DOCUMENT_TOKEN_TO_BE_REPLACED
Top PicksView