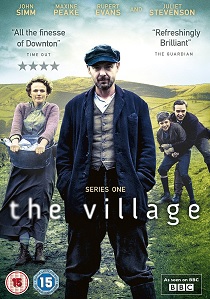 The Village, an epic six part drama series charting the life and turbulent times of one Derbyshire village across a period of flux in the 20th Century, is available on DVD on 8th July 2013 courtesy of Entertainment One.

Proving an immediate ratings winner, the first episode was watched by over 8.5 million viewers and a second season has been re-commissioned by the BBC. This first series starts in 1914 and takes us through the First World War, ending in 1920. The lives of the villagers from children to farm workers, factory owners, to landed aristocracy lie at the heart of its narrative.

The Village is a timeless coming-of-age story, told through the nostalgic eyes of one man, Bert Middleton, From lustful first-love and the dramas of war, to a father's hard lessons and a mother's love; Bert has seen it all. The Village is moving, uplifting and full of outstanding performances.

If you're a fan of similar dramas such as Call The Midwife or Downton Abbey, you'll relish the evocative and powerful scenes in The Village when it arrives on DVD on 8th July 2013.

HotUHD
Now more stunning than ever before, return to the stunning locations and epic adventures in Peter Jackson's Middle-earth in The Lord of the Rings Trilogy, arriving on stunning 4K UHD 30th November 2020 from Warner Home Video. END_OF_DOCUMENT_TOKEN_TO_BE_REPLACED
Top PicksView