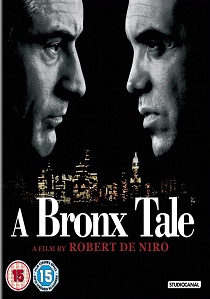 The streets of the Bronx are a tough place for a kid to grow up - you learn fast or lose everything. In his directorial debut, two-time Academy Award-Winner Robert De Niro also stars as Lorenzo Anello, a hard-working bus driver and family man, who must stand up to local mob boss, Sonny (Chazz Palminteri) if he is to keep his son from falling into a life of crime.

When Lorenzo's nine-year old son Calogero (Lillo Brancato) witnesses a murder committed by Sonny and refuses to identify the killer, the gangster takes the boy under his wing, gradually introducing him to a new way of life. Calogero learns about the virtues of hard, honest work from his father, who owns nothing but his integrity; but he learns about easy money and life on the streets from the man who owns them - Sonny.

Calogero grows up under the wings of both men, torn between his own natural honesty and his fascination with the gangster. Now Calogero must choose between earning respect like his father, or commanding it like Sonny.

However, for every cent of easy money, there's a harsh and sometimes deadly, lesson to be learned.

Having opened to worldwide critical acclaim and vividly evoking the sights and sounds of the Bronx, Robert De Niro's directorial debut is a compelling tale of love and loyalty.