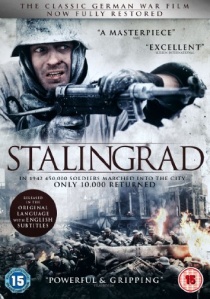 Arrow Films, the distributors of The Hunt, A Hijacking and Love Is All You Need, are pleased to announce the release of the German celebrated classic war movie, Stalingrad, available on demand & digital and on Blu-ray & DVD from 3rd November 2014. This release will mark the first time that Stalingrad has been made available on Blu-ray in the UK.

In the spring of 1942 German troops advance deep into the Soviet Union, en route to Stalingrad. Hitler, seriously misjudging the tenacity of the Red Army, is convinced that the city can be conquered before winter. Inadequately clothed and without sufficient food, the Nazi troops literally freeze and starve to death, largely abandoned by their leaders. For the soldiers Fritz, Hans, Rollo and GeGe the struggle for life has just begun. Gunfire and bombs are only one part of this hell; most of the soldiers will lose the battle against hunger and cold.

The film presents this turning point in World War II as a vast tableau of horror in which the average German soldier was as much a victim of Nazi evil as were the Soviet people.

HotUHD
Just as relevant and incendiary now as it was three decades ago, King of New York returns 16th November 2020 on 4K UHD with guns blazing in this definitive special edition from Arrow Video, including a new director-approved 4K restoration. END_OF_DOCUMENT_TOKEN_TO_BE_REPLACED
Top PicksView