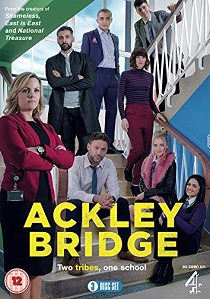 Things are changing in the Yorkshire mill town of Ackley Bridge. Previously the Asian and white communities have rarely mixed. Now, as their two comprehensive schools have merged, lives and cultures are set to collide. With lessons about to be learnt in and out of the classroom, education may not be the first thing on the agenda.

DVD
From the 1870s through to modern day, Radioactive, released on DVD 27th July 2020 from StudioCanal, is a journey through Marie Curie's enduring legacies - her passionate partnerships, scientific ... END_OF_DOCUMENT_TOKEN_TO_BE_REPLACED
Hot PicksView

UHDBoxset
14/10/2020
Now more stunning than ever before, return to the stunning locations and epic adventures in Peter Jackson's Middle-earth in The Hobbit Trilogy, arriving on stunning 4K UHD 30th November 2020 from ...

Villanelle and Eve are back again with more explosive action and breathtaking cliffhangers in the latest instalment of the multi-award winning drama Killing Eve, released on DVD 2nd November 2020 from BBC Worldwide.

Starring #GilGerard #ErinGray, why not settle down & binge watch on a #Tuesday with #BuckRogersInThe25thCentury ava…