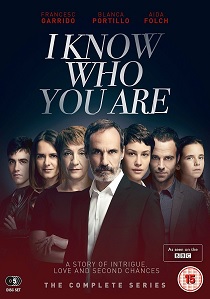 Nordic Noir & Beyond is thrilled to announce the DVD Box Set release of the first season of the critically acclaimed Spanish thriller I Know Who You Are on 14th August 2017.

Juan Elias (Francesc Garrido), a successful criminal lawyer with aspirations of becoming dean of the university and teacher of the most sought after ethics Masters Course in the country, can't remember who he is. His ripped clothes and injured faces indicate that he has had an accident.

Hoping that the familiar surroundings will help jog his memory, Elias returns home to his wife Judge Alicia Castro (Blanca Portillo) and their 10 year old son and rebellious 11 year old daughter. While discovering what kind of husband and father he was and trying to rebuild the emotional ties that he once had, Juan is faced by another challenge.

When the police find the wreck of Elias' car, they also find the mobile phone of his 23 year old niece, Ana Saura (Susana Abaitua). She was his student and disappeared the night of his accident. All the evidence points to the fact that Elias killed her. Now he will have to find a way to prove his innocence, even though he is unsure of whether or not he's guilty.

DVD
Four years after South Korea's total decimation in Train To Busan, the zombie outbreak thriller that captivated audiences worldwide, the next nail-biting chapter in the post-apocalyptic world Train to ... END_OF_DOCUMENT_TOKEN_TO_BE_REPLACED
Hot PicksView