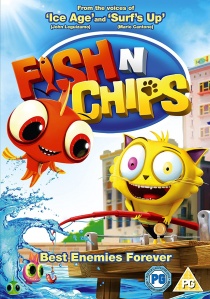 Best enemies forever, Fish and Chips, an amazing fish and a fiendish cat, have a hate-hate relationship. Only one thing will bring this determined little goldfish and not so streetwise tom-cat together and it is the thing they have been battling for since birth: A bone!

Handed down through generations, both believe this charm belongs to them and neither will rest until they have it and both are prepared to do anything to get it!

Starring the voices of John Leguizamo (Sid in Ice Age) and Mario Cantone (Surf's Up) this is the modern day Tom and Jerry that kids will love to love in this colourful and fun cat and fish chase!