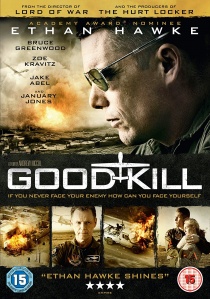 From Andrew Niccol, the creator of Gattaca and The Truman Show comes Good Kill, a tense and psychological journey into the morality of drone warfare, released on DVD and Blu-ray by Arrow Video on 3rd August 2015.

A Las Vegas fighter-pilot turned drone-pilot (Ethan Hawke; Training Day, Sinister, Gattaca) fights the Taliban via remote control for half of his day, then goes home to his wife (January Jones; X-Men: First Class, TV's Mad Men)) and kids in the suburbs for the other half. But the pilot is starting to question the mission. Is he creating more terrorists than he's killing? Is he fighting a war without end?

Writer-director Andrew Niccol handles the subject matter expertly, turning into a tense and unnerving experience that draws on elements from some of his best work to date, most notably Gattaca and The Truman Show. It's dark, affecting, and distant all at once.

Niccols reunites with his Gattaca star Ethan Hawke, who remains one of Hollywood's most understated but no-less invaluable stars. He grounds the film with a gritty performance, leading a cast of the industry's hottest talent, including January Jones and Zoe Kravitz - all on top form in roles that explore the wider effects a technologically advanced military.

BD
Will Smith and Martin Lawrence are back on the case in the roles that launched the dynamic duo to global superstardom in Bad Boys For Life, arriving on DVD, Blu-ray and 4K UHD 25th May 2020 from Sony ... END_OF_DOCUMENT_TOKEN_TO_BE_REPLACED
Hot PicksView