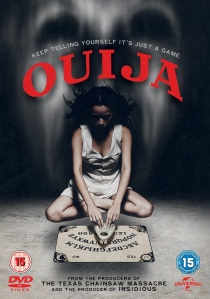 Inspired by the classic occult board game, a group of teens accidentally unleash a dark power from the other side in Ouija, coming to DVD and Blu-ray on 9th March 2015, courtesy of Universal Pictures (UK).

Produced by Platinum Dunes partners Michael Bay, Brad Fuller, and Andrew Form (The Purge, The Texas Chainsaw Massacre, Friday the 13th) and Blumhouse Productions' Jason Blum (Paranormal Activity, Insidious, The Purge), Ouija delivers extra chills with exclusive bonus content including a deeper look inside the mystery of the Ouija board, film commentary, and much more.

After Debbie (Shelley Hennig, Teen Wolf) suddenly dies, her best friend Laine (Olivia Cooke, Bates Motel,) attempts to contact her using an antique Ouija board she finds in Debbie's room. When the curious teen begins asking the board questions and stumbles upon the mystery of her friend's death, Laine discovers a resident spirit calling itself DZ, and eerie, inexplicable events begin to follow her. The group of friends dig deeper into the history of Debbie's house and are shocked to find that Debbie wasn't the first victim-and won't be the last if they don't figure out how to close the portal to the spirit world they've opened.

DVD
The end of the line is only the beginning in a wild, non-stop thrill ride through modern-day Japan as Bullet Train is released on DVD, Blu-ray and 4K UHD 24th October 2022 from Sony Pictures Home Entertainment END_OF_DOCUMENT_TOKEN_TO_BE_REPLACED
Top PicksView