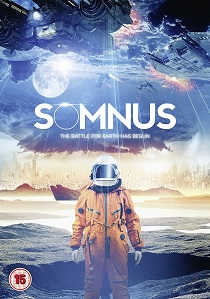 The feature filmmaking debut from writer-director Chris Reading, Somnus is an ambitious, modestly budgeted Sci-Fi that asks big questions about the future of the world as we know it.

The grief-stricken captain of a commercial vessel embarks on his final mission in command of a small crew desperate to get back to earth. However, the shipboard computer has ideas of its own, and sets about picking off the drew one-by-one in an effort to find and gain control of a planet-destroying bomb.

Soon, an 'accident' forces them to divert to Somnus, a derelict asteroid station in a forgotten sector of the solar system. But far from offering sanctuary, the inhabitants of Somnus have a dark past and troubling plans for the future of mankind...

Somnus is released on DVD by Soda Pictures on 2nd January 2017.

DVD
Stuck in a meaningless job and drowning in the alcoholism that cost him his marriage, Jack Cunningham is asked to coach the basketball team at his alma mater, in Finding The Way Back is released on ... END_OF_DOCUMENT_TOKEN_TO_BE_REPLACED
Hot PicksView