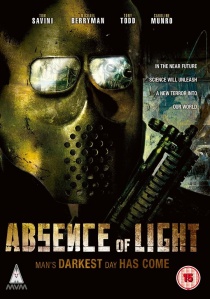 Combining elements of sci-fi and horror with the conventions of the conspiracy thriller, The Absence Of Light is a genre-busting trip into a world where unscrupulous political cover-ups, inexplicable 'accidents' and high-tech experiments collide in an apocalyptic showdown on what could prove to be mankind's darkest day.

When covert intelligence agents and assassins-for-hire Puritan (Conant) and Sultan (Thornsberry) become involved in the tangled web of intrigue and blackmail being spun around a corrupt politician vying for re-election to the US Senate, they also find themselves caught in the crossfire between two powerful villains known only as The Higher Power (Savini) and Whiplash (Hess).

At the heart of the conflict is the breakthrough scientific research of a benevolent scientist (Todd), who has developed a method for bioengineering inhuman super-beings that could lead to previously unimaginable medical benefits for the human race. But, realising the value of the project's military potential, The Higher Power and Whiplash are each determined to possess the information with a view to creating their own armies of super-soldiers that will ultimately bring them world domination.

Precariously balanced between good and evil, Puritan and Sultan must choose sides as they become the only ones who can prevent events that could throw the world back to the Stone Age as a new era of darkness is ushered in.

Related Articles
The Last House on the Left: Limited Edition, The House On The Edge Of The Park, Smash Cut
The Perks of Being a Wallflower, Knightriders
Slaughter High, The Spy Who Loved Me
Comments
Hot Pick

HotBD
Two of Britain's most notorious brothers The Krays were taken on by another famous pair of siblings The Kemps in Peter Medak's big screen gangster biopic set for a Limited Edition Blu-ray release from Second Sight Films on 12th July 2021. END_OF_DOCUMENT_TOKEN_TO_BE_REPLACED
Top PicksView