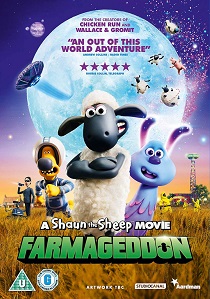 NewsAnimationFamily
News Article Go back to homepage
When an alien with amazing powers crash-lands near Mossy Bottom Farm, Shaun the Sheep goes on a mission to shepherd the intergalactic visitor home before a sinister organisation can capture her as A Shaun The Sheep Movie: Farmageddon arriving on DVD, Blu-ray and 4K UHD 10th February 2020 from StudioCanal.
Justin Fletcher, John Sparkes, Amalia Vitale
Nick Park, Will Becher
Paul Kewley
StudioCanal
1 hour 26 minutes
10/02/2020
#ShaunTheSheep #Farmageddon
Thank you for supporting DVD365.net when you order using the link(s) below. As an Amazon Associate we earn from qualifying purchases
Buy DVD
Buy BD
Buy UHD
Buy Digital
Information

Strange lights over the quiet town of Mossingham herald the arrival of a mystery visitor from far across the galaxy...

For Shaun the Sheep's second feature-length movie, the follow-up to 2015's smash hit Shaun The Sheep Movie, A Shaun The Sheep Movie: Farmageddon takes the world's favourite woolly hero and plunges him into an hilarious intergalactic adventure he will need to use all of his cheekiness and heart to work his way out of.

When a visitor from beyond the stars - an impish and adorable alien called LU-LA - crash-lands near Mossy Bottom Farm, Shaun soon sees an opportunity for alien-powered fun and adventure, and sets off on a mission to shepherd LU-LA back to her home.

Her magical alien powers, irrepressible mischief and galactic sized burps soon have the flock enchanted and Shaun takes his new extra-terrestrial friend on a road-trip to Mossingham Forest to find her lost spaceship.

Little do the pair know, though, that they are being pursued at every turn by a mysterious alienhunting government agency, spearheaded by the formidable Agent Red and her bunch of hapless, hazmat-suited goons.

With Agent Red driven by a deep-seated drive to prove the existence of aliens and Bitzer unwittingly dragged into the haphazard chase, can Shaun and the flock avert Farmageddon on Mossy Bottom Farm before it's too late?

From the multi-award-winning studio that brought you Chicken Run and Wallace & Gromit, hold on to your seats as we blast off on an exciting and heart-warming sci-fi comedy adventure as A Shaun The Sheep Movie: Farmageddon arriving on DVD, Blu-ray and 4K UHD 10th February 2020 from StudioCanal.