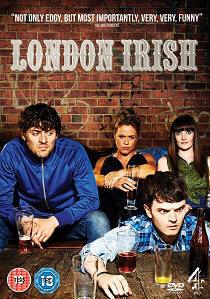 Written by former Derry resident Lisa McGee (Raw, The White Queen), London Irish chronicles the lives of Northern Irish expats - Conor (Logan), his older sister Bronagh (Keenan, Being Human), his best friend Packy (Campion), and Niamh (Kat Reagan) - as they leap between drinks and hangovers and begin to suspect that they are getting too old for this kind of life. They probably need to take a long, hard look at themselves and they will; as soon as they shake off this hangover.

Produced by Company Pictures (Shameless, Skins) London Irish on DVD includes all six episodes from the first season and exclusive special features. Whether you've been following the friends' antics on Channel 4, or are discovering the series for the first time, share a pint and some laughs with London Irish on DVD this November.

UHD
Sam Mendes, the Oscar®-winning director of Skyfall, Spectre and American Beauty, brings his singular vision to his World War I epic, 1917 to DVD, Blu-ray and 4K Blu-ray 18th May 2020 from ... END_OF_DOCUMENT_TOKEN_TO_BE_REPLACED
Top PicksView