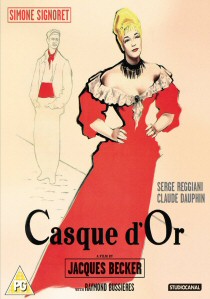 Directed by Jacques Becker (Touchez pas au Grisbi) in 1952 and evoking the Belle Epoque period perfectly, Casque D'Or, a story of an ill-fated love affair, is released on Blu-ray by StudioCanal on 5th November 2012.

When mob boss, Felix Leca (Claude Dauphin), takes an active interest in their affair, an underworld rivalry ensues leading to a treacherous and tragic end.

Casque D'Or is a classic, poetic tale of doomed romance based on the true-life Leca-Manda scandal. Evoking the Belle Epoque period perfectly and with an unforgettable femme fatale performance from Signoret, Casque D'Or is considered a Becker masterpiece.

HotDVDBD
From the producers of Nobody and John Wick comes a bare-knuckle, coal-dark holiday action-comedy that says you should always bet on red as Violent Night sledges in on DVD and Blu-ray 6th March 2023 from Warner Home Video. END_OF_DOCUMENT_TOKEN_TO_BE_REPLACED
Top PicksView