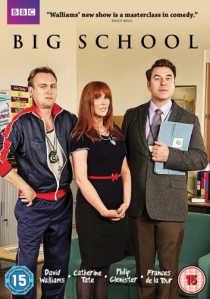 Deputy Head of Science, Mr Church (David Walliams) has been at Greybridge School for 15 years. Disillusioned with teaching, he is about to resign after a particularly dramatic experiment with liquid nitrogen and 1000 ping pong balls is met with apathy by his pupils. However, the arrival of the new French teacher changes everything!

Taking up her post following the tragic death of her predecessor, Miss Postern (Catherine Tate) is determined to make a difference in the classroom with new teaching methods - anyone for Vocab Tennis?

PE teacher and would-be lothario Mr Gunn (Philip Glenister) is also interested in the new French teacher and is determined to "plough" Miss Postern - probably on Friday night when his mum is at seniors' Zumba.

Big School is out on BBC DVD on 23rd September 2013 with extras including unseen footage from the series.