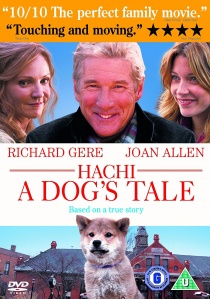 Hollywood legend and Golden Globe winner Richard Gere (Chicago; Unfaithful; An Officer And A Gentleman) and three-time Oscar nominee Joan Allen (The Bourne Ultimatum; The Notebook and Nixon) head the cast of Hachi: A Dog's Tale which is released by Entertainment In Video on rental and retail DVD and Blu-ray on 5th July 2010.

Based on an enchanting and heart-warming true story about the unbreakable bond between a dog and its master, the film opens with University professor Parker Wilson (Richard Gere) finding a lost puppy (Hachi) at his local train station. Not wanting to hand it over to the local dog pound, Parker takes it back home with him despite a 'no dogs' ban that has been decreed by his canine-hating wife Cate (Joan Allen).

At first Parker tries to hide Hachi from his wife but not surprisingly his best efforts are in vain and Cate soon finds out. They agree that Hachi can stay with them but only until they find a permanent home for the puppy or they can trace its owner.

However, nobody comes forward to claim the dog and gradually Parker and Hachi become so inseparable that Cate cannot help but accept the mystery puppy into their family. The two of them develop an inexplicably close friendship and every morning Hachi accompanies Parker to the train station and then faithfully returns to greet his master every evening in exactly the same place and at exactly the same time. Through his daily trips to the station, Hachi becomes a regular fixture of the neighbourhood and a symbol of love, friendship and unyielding loyalty to everyone who meets him. His faithful devotion to his master exposes the great power of love and how this simplest of acts can become the grandest gesture of all.

HotDVDBDUHD
From the acclaimed director of fan-favourites such as Baby Driver, Shaun of the Dead and The World's End comes the tribute to 1960s London in Last Night In Soho, available to own on DVD, Blu-ray and 4K UHD 31st January 2022 from Universal Pictures (UK). END_OF_DOCUMENT_TOKEN_TO_BE_REPLACED
Top PicksView