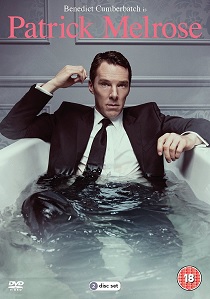 Benedict Cumberbatch (Sherlock) returns to our TV screens with a mind-blowing performance as the eponymous Patrick Melrose, a deeply troubled man struggling with his past and out-of-control drug-fuelled present. Based on the much-loved novels by Edward St Aubyn and adapted by renowned writer David Nicholls (One Day), this Sky original production arrives on DVD from Acorn Media.

The critically acclaimed series depicts five chapters in the life of the troubled Melrose, from his abusive childhood to his drug-addled adulthood and co-stars Hugo Weaving (The Lord of The Rings) and Jennifer Jason Leigh (The Hateful Eight) alongside an outstanding ensemble cast. Following its run on Sky Atlantic this sometimes dark but sparklingly sharp drama is released on DVD on 16th July 2018.

We first meet Patrick Melrose the professional gadabout and hedonist extraordinaire in the early 1980s. He's a witty, privileged twentysomething who's partial to pretty much every narcotic imaginable, but when news of his father's death breaks, who knows if it's the heroin or their terrible relationship that causes him to react with such indifference.

Patrick must dutifully collect his father's remains from New York, where, he confidently declares, he will get clean. But getting sober in the Big Apple is less a piece of cake, more a rancid slice of cold turkey. He's soon hitting the city's seedier back streets to score a fix of anything and everything on offer.

Prepare for the extreme highs and the crashing lows of Patrick Melrose in this riveting drama featuring a performance of a lifetime from one of Britain's acting greats Benedict Cumberbatch.

BD
Bursting with indelible characters, quotable dialogue and jaw-dropping special effects, Tremors is back and bigger than ever in this 4K-restored and fully loaded collectors' edition, available on 4K ... END_OF_DOCUMENT_TOKEN_TO_BE_REPLACED
Hot PicksView