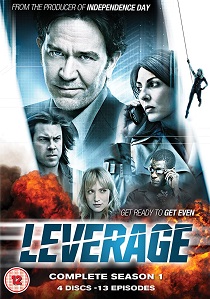 The DVD release follows a spectacular TV debut on Bravo and is soon to be seen on Virgin1 this summer, with fans across America eagerly awaiting the US launch of season three already. Leverage features Timothy Hutton as the dapper Nate Ford, a once-loyal corporate investigator who recovers millions of dollars in stolen goods for his employer. But when his son's insurance claims are denied - contributing to his death - Nate ends years of service and large paychecks and becomes determined to bring down the corrupt fat cats.

As Nate is forced into his own style of revenge, he forms a renegade gang of energetic, quick-witted hackers, grifters and con-artists to join him on his quest. Together they concoct increasingly elaborate scams to wreak havoc on corrupt authorities - and use their underhanded tactics to score justice for society's underdogs.

All 13 episodes of Season 1 are available to buy as a four disc set from 6 September. This is one show that it would be a crime to miss.