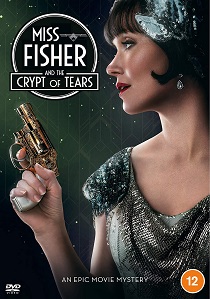 Glamorous lady detective Phryne Fisher (Essie Davis, The Babadook) returns in a cinematic sequel to the wildly popular television series Miss Fisher's Murder Mysteries as Miss Fisher and the Crypt of Tears is released on DVD 11th May 2020 from Acorn Media.

With her trademark wit, impeccable style, and trusty pearl-handled revolver, Phryne fights injustice on an international scale in this globe-trotting adventure. In 1929 Jerusalem, Phryne rescues a young Bedouin girl held captive after a village massacre and reunites her with her uncle at a stately English manor. But then a man claiming to have information for the girl is shot, leaving behind a mysterious pendant.