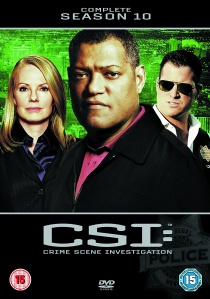 NewsTV SeriesDrama
News Article Go back to homepage
CSI: Crime Scene Investigation is the most watched television drama in the world with more than 89 million viewers. For the first time ever CSI: Crime Scene Investigation Season 10 is released to buy in one complete DVD box set from 7th February 2011 by Momentum Pictures.
Momentum Pictures
Unknown
07/02/2011
Thank you for supporting DVD365.net when you order using the link(s) below. As an Amazon Associate we earn from qualifying purchases
Buy DVD
Information

For the first time ever CSI: Crime Scene Investigation Season 10 is released to buy in one complete DVD box set from 7th February 2011 by Momentum Pictures.

Season 10 begins after the infamous departure of Grissom (William Peterson) and the arrival of Dr Raymond Langston (Laurence Fishburne) as he hits the ground running in the CSI hot-seat. To mark the arrival of Dr Langston, Episode 1 kicks off with a stunning two and a half minute bullet time montage (no doubt paying homage to Morpheus arriving on the show) in which we see the CSIs frozen in a moment of carnage. The episode then retraces the steps of all involved for a jaw dropping lead up to the sequence.

Season 10 also showcases, for the first time ever, all three CSI teams as they intertwine in this heart-stopping story as Dr Langston follows a human-trafficking ring that specializes in black-market organ harvesting to New York. It's here he assists the NY CSIs to free a hostage taken by the criminal group and stumbles across a jaw dropping case. The story began with a missing person's case in CSI: Miami and concludes in CSI: Crime Scene Investigation, as ties to the case lead the team to a prostitution ring in Las Vegas.

The season draws to a close with a two part climax to the Dr Jekyll saga, in which the CSIs must investigate one of their own when Langston is accused by a former colleague of being part of the Dr Jekyll murder case. Meanwhile the CSI's lives are on the line as they close in on the elusive Dr Jekyll, with more than one member of the team in danger of not living to see his capture.

CSI - the acronym for Crime Scene Investigation - tells the story of the little-known and less understood heroes who work crime scenes - the forensic investigators. These are the men and women who work 24/7 to untangle the evidence behind the yellow police tape, piecing together seemingly insignificant puzzle pieces to nail the bad guys and serve those who are most important and sometimes overlooked - the victims.

CSI: Crime Scene Investigation is the most watched television drama in the world with more than 89 million viewers. In the UK the series is the highest rating US drama on television and has been a phenomenal success on DVD having sold over 4.5 million copies to date across the franchise. The CSI franchise (including the Miami and New York branches) holds the accolade of being the most watched drama in the world with a global audience of over two billion.

UHD
In Disney's Mulan, released on DVD, Blu-ray and 4K UHD 10th November 2020, a fearless young woman risks everything out of love for her family and her country to become one of the greatest warriors China has ever known. END_OF_DOCUMENT_TOKEN_TO_BE_REPLACED
Top PicksView