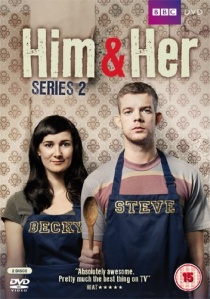 NewsTV Series
News Article Go back to homepage
BBC Three's highest rated sitcom in the history of the network returns to the small screen for a brand new series in, Him & Her Series 2, launching on DVD from the 26th December 2011 from 2entertain.
Camille Coduri, Ricky Champ, Kerry Howard, Joe Wilkinson, Sarah Solemani, Russell Tovey
Richard Laxton
Matthew Justice, Lyndsay Robinson, Kenton Allen, Stefan Golaszewski
2entertain
Unknown
26/12/2011
Thank you for supporting DVD365.net when you order using the link(s) below. As an Amazon Associate we earn from qualifying purchases
Buy DVD
Information

BBC Three's highest rated sitcom in the history of the network returned to the small screen for a brand new series this Winter attracting record ratings and huge critical acclaim by a wide variety of reviewers from Heat magazine to The Observer. Him & Her Series 2 launches on DVD from the 26th December 2011 from 2entertain.

Love goes on for Becky (Sarah Solemani) and Steve (Russell Tovey), now living together but still gloriously lazy. The second series sees Becky move into Steve's place permanently. Their relationship blossoms above the nitty gritty of living together - but there's trouble on the horizon. Becky's sister Laura (Kerry Howard) and her friend Shelly (Camille Coduri) have become best mates with Steve's ex girlfriend. Dan (Joe Wilkinson), the lonely bloke from up-stairs is back with his girlfriend and Laura's fiancée Paul (Ricky Champ) is up to his old tricks again.

Him & Her lifts the lid on life as it really is, warts and all, focussing on the important stuff like coat hangers, smelly clothes and orange squash.

HotDVDBDUHD
The end of the line is only the beginning in a wild, non-stop thrill ride through modern-day Japan as Bullet Train is released on DVD, Blu-ray and 4K UHD 24th October 2022 from Sony Pictures Home Entertainment END_OF_DOCUMENT_TOKEN_TO_BE_REPLACED
Top PicksView