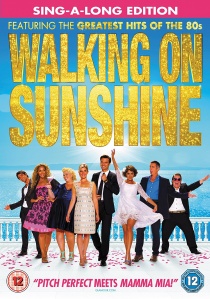 After a whirlwind romance, Maddie, fresh from a long term relationship, is preparing to marry gorgeous Raf and has invited her sister Taylor to the wedding in Puglia, Italy. Unbeknownst to Maddie, however, Raf is Taylor's ex-holiday flame, and the love of her life... and that is just one of the set-backs on their road to happy ever after...

Featuring the smash hits of the 80s including Holiday, Venus, How Will I Know, Girls Just Wanna Have Fun, The Power of Love, It Must Have Been Love, Eternal Flame, If I Could Turn Back Time and Wake Me Up Before You Go-Go, Walking On Sunshine is a vibrant romantic musical filled with heart-warming nostalgia and toe-tapping hits!

HotUHD
Let an awesome journey unlike any other begin as Stanley Kubrick's dazzling 2001: A Space Odyssey is released on 4K UHD 22nd February 2021 from Warner Home Video. END_OF_DOCUMENT_TOKEN_TO_BE_REPLACED
Hot PicksView