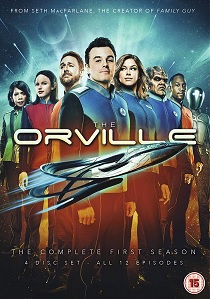 From Emmy Award-winning executive producer and creator Seth MacFarlane (Family Guy, Ted, Cosmos: A SpaceTime Odyssey), The Orville is a live-action, one-hour space adventure series set 400 years in the future that follows The U.S.S. Orville, a mid-level exploratory spaceship. Its crew, both human and alien, face the wonders and dangers of outer space, while also dealing with the problems of everyday life.

HotDVDBD
From the producers of Nobody and John Wick comes a bare-knuckle, coal-dark holiday action-comedy that says you should always bet on red as Violent Night sledges in on DVD and Blu-ray 6th March 2023 from Warner Home Video. END_OF_DOCUMENT_TOKEN_TO_BE_REPLACED
Top PicksView