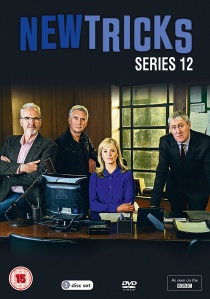 The team are back for the twelfth and final series of the much-loved, smash hit BBC drama New Tricks. Following its final outing on BBC One on Tuesday evenings, series 12 comes to DVD alongside a bumper box set, New Tricks The Complete Collection courtesy of RLJ Entertainment's Acorn Label.

The team must put head over heart as one of their own is implemented in a case that spans three decades and shakes the police force to its core, while the very existence of UCOS also comes under threat.

Gerry (Waterman) becomes embroiled in a scandal that forces him to confront some skeletons in his closet, while Danny (Lyndhurst) and Fiona (Tracy-Ann Oberman - Eastenders, Doctor Who) take their relationship up a notch, Steve (Lawson) worries about his bank balance and everyone must pull together when Sasha is dealt a devastating blow.

From bodies in the basement to skeletons in the swimming pool, lottery syndicates gone fatally wrong to making sense of The Madhouse, the UCOS team must pull together more than ever to uncover the city's long buried secrets and bring justice to the streets of London.

The hugely popular and long running franchise, which has generated more than 5 million pounds in DVD sales, bows out with these two home entertainment releases on 12th October 2015, New Tricks Series 12, a three-disc set and New Tricks The Complete Collection, a stunning thirty-six disc set.

BD
Experience the thriller influenced by the astounding real-life story of the Gucci family and their unexpected legacy in House Of Gucci, available on Blu-ray and DVD 21st February 2022 from Universal Pictures (UK). END_OF_DOCUMENT_TOKEN_TO_BE_REPLACED
Top PicksView