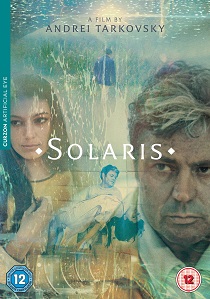 When Kris Kelvin is sent on mission to the Solaris Space Station, he is confronted with a skeleton crew who are display psychological instability due to the presence of 'visitors'. It's not long before Kris begins to encounter his own visitor - his late wife. Taunting him with illusionary compassion, Kris must choose whether to cling to reality or submit to the planet's gift of a lost love regained.

Released in 1972, Solaris is Andrei Tarkovsky's third feature and his most far-reaching examination of human perceptions and failings. It's often compared to Kubrick's 2001, but although both bring a metaphysical dimension to bear on space exploration, Solaris has a claustrophobic intensity which grips the attention over spans of typically Tarkovskian stasis.

Solaris is released on DVD and Blu-ray on 8th August 2016 courtesy of Curzon Artificial Eye.

DVD
The BAFTA-winning hit Unforgotten, released on DVD 26th April 2021 from BBC Worldwide, returns for a fourth series, as Cassie and Sunny investigate a cold case with alarming links to the police force. END_OF_DOCUMENT_TOKEN_TO_BE_REPLACED
Top PicksView