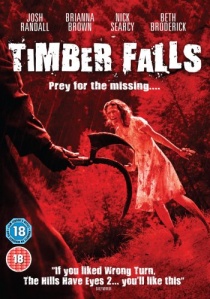 From the producers of Die Hard 4.0 and Lord Of War comes Timber Falls, released on DVD by Scanbox Entertainment on 6th October 2008, a terrifying tale of hikers in peril that does for camping and hiking in West Virginia what "Hostel" did for backpacking in Slovakia.

Directed by Tony Giglio (Chaos) and starring Josh Randall (One Of Our Own), up-and-coming actress Brianna Brown (Knocked Up; The 40 Year Old Virgin) and Beth Broderick (Lost; Sabrina, The Teenage Witch), this latest addition to the popular "survival horror" genre delivers all the shocks, violence, gore and nail-biting tension that any horror fan could ever want. On a weekend hiking and camping trip in the rugged, wooded mountains of West Virginia, Mike (Randall) and girlfriend Sheryl (Brown) are looking forward to a peaceful break from city life with nothing troubling them except for maybe the odd mosquito.

But the holiday immediately gets off to an unpleasant start when they experience a minor run-in with a trio of local rednecks. The next morning, after a quiet night's camping in the woods, Mike awakes to discover Sheryl missing. Convinced the rednecks are behind her disappearance, he heads off to search for her, eventually ending up at the cabin of a God-fearing woman who offers to help. Unfortunately, the kind of help she is offering isn't exactly what Mike was hoping for. Searching the cabin, he finds Sheryl bound to a table in the cellar, the walls lined with candles, crucifixes and foetus-filled jars. It appears that whoever was responsible for taking Sheryl has some very unpleasant plans for the unmarried, fornicating sinners who have wandered into their midst.

A gruesome piece of "twisted hardcore horror" (Nuts) in the tradition of The Texas Chain Saw Massacre, The Hills Have Eyes and Wrong Turn, Timber Falls manages to rise above the level of the average "survival horror" movie thanks to great production values and exceptionally convincing performances from the lead actors.

DVD
From the 1870s through to modern day, Radioactive, released on DVD 27th July 2020 from StudioCanal, is a journey through Marie Curie's enduring legacies - her passionate partnerships, scientific ... END_OF_DOCUMENT_TOKEN_TO_BE_REPLACED
Hot PicksView

UHDBD
27/09/2020
Bursting with indelible characters, quotable dialogue and jaw-dropping special effects, Tremors is back and bigger than ever in this 4K-restored and fully loaded collectors' edition, available on 4K ...

Every family has its traditions, but for the Roys, they include lying, backstabbing and all sorts of other chicanery as Succession: Season 2 is released on DVD 14th September 2020 from Warner Home Video.
Movie quote