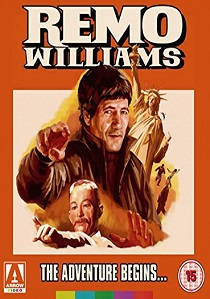 First they faked his death and gave him a new identity. Now a top secret organisation is training a former New York cop to combat corrupt forces operating outside of the law. His mentor, Chiun, is an ageing Korean master of the martial arts who can run on water and dodge speeding bullets.

Born on the pages of Warren Murphy and Richard Sapir's The Destroyer series of men's adventure novels, Remo Williams was placed in the capable hands of Bond director Guy Hamilton (Goldfinger, The Man with the Golden Gun) for his big-screen outing. Fred Ward (Tremors) plays the trainee assassin, with Academy Award-winner Joel Grey (Cabaret) occupying the role of Chiun.

With its classic set-piece atop the Statue of Liberty, much-loved score by Craig Safan and a healthy sense of its own silliness, Remo Williams: The Adventure Begins..., released on Blu-ray by Arrow Films on 7th July 2014, offers up a cracking slice of mid-eighties action.

DVD
One of the most compelling and conflicted characters in Sony Pictures Universe of Marvel Characters comes to the big screen as Jared Leto transforms into the antihero Michael Morbius as Morbius is released on 4K Ultra HD, Blu ... END_OF_DOCUMENT_TOKEN_TO_BE_REPLACED
Top PicksView