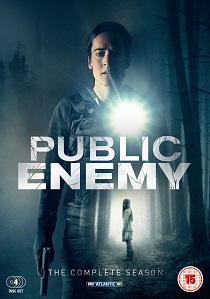 Nordic Noir & Beyond is thrilled to announce the DVD Box Set release of the Belgian thriller Public Enemy on 24th July 2017.

After 20 years in prison Guy Béranger (Angelo Bison), a dangerous child murderer, is released on parole to the custody of the monks at Vielsart Abbey. This leads to an outcry from the small village nearby and to the rest of the country.

When a young girl disappears on the outskirts of the abbey, the entire village is in uproar. Chloé Muller (Stéphanie Blanchoud), a young inspector based in Brussels, is assigned to the investigation to protect the despised Béranger. Her investigation brings her face-to-face with the fears and secrets of the seemingly peaceful local community.

Confronted by a mob willing to take justice into their own hands and a brotherhood prepared to preserve the reputation of their abbey at all costs, the young monk Lucas (Clément Manuel) and Chloé have to join forces in order to re-establish order and truth.

Being a huge success in Belgium, Public Enemy won the first MipDrama Screenings Coup de Coeur Award at Cannes in 2016.