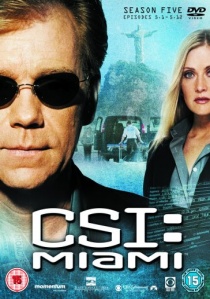 NewsTV SeriesDramaCrime
News Article Go back to homepage
The multi-award winning CSI is returning to DVD with the 30th June 2008 release of CSI Miami 5.1, Episodes 5.01-5.12 and the 14th July 2008 release of CSI NY 4.1, courtesy of Momentum Pictures.
Momentum Pictures
9 hours 0 minutes
14/07/2008
Thank you for supporting DVD365.net when you order using the link(s) below. As an Amazon Associate we earn from qualifying purchases
Buy DVD
Information

The multi-award winning world wide phenomenon that is CSI is returning to DVD with the 30th June 2008 DVD release of CSI Miami 5.1, Episodes 5.01-5.12 as a 3-disc DVD box set, courtesy of Momentum Pictures. Each thrilling episode of the new season is filled with the same twists and turns that keep the CSI team working at peak form in order to speak for Miami's victims who can no longer speak for themselves.

Introduced as part of a regular season episode of the top-rated drama series, CSI: Crime Scene Investigation, CSI Miami premiered on the CBS Television Network in 2002. The premiere received the highest rating of any network drama in the past eight years and garnered a People's Choice Award for Best New Drama Series. A fast-paced forensics drama set against the lush backdrop and pulsing rhythms of the southernmost U.S. metropolis, CSI Miami follows South Florida's foremost team of investigators who use cutting-edge forensics and police work to solve crimes. Led by Lieutenant Horatio Caine (David Caruso), the Miami-Dade Crime Scene Investigators work amid the lush, tropical surroundings and cultural crossroads of Miami. Caine, a former bomb squad detective from New York, often relies on a mix of gut instinct and the forensic evidence presented by each case.

CSI Miami 5.1 kicks off with one of the most exciting backdrops ever filmed in the series. Horatio Caine and Erik Delko jet off to Rio de Janeiro, Brazil, to seek revenge for the murder of Marisol Delko Caine. Before they leave Brazil, characters living on each side of the law will die, and the drug lord's business will continue in Miami, putting Ray Jr.'s life in dire jeopardy.

During CSI Miami 5.1, each member of the team faces their own life-threatening calamities, each time bringing the team closer together for living through them. Alexx is caught in the crossfire of a rocket explosion while at the courthouse to testify, and is nearly killed by the blast. Calleigh is targeted for death when a suspect fears that her work on a case will bring them down. After ending his relationship with an opportunistic news reporter, Wolfe finds himself going back to her for help... this time at Horatio's urging.

Out two weeks later is CSI NY 4.1. This thrilling 3-disc DVD box set released on 14th July 2008 follows a set of New York forensic investigators who use high-tech science to follow the evidence and solve crimes in the Big Apple. During Season 4 the audience will be sent for a joy ride when they watch Detective Mac Taylor cope with a dangerous stalker with a fixation on the number 333, bloody t-shirts, calls in the middle of the night and a puzzle of the New York Skyline spotted with blood. What does it mean and how does it connect with Mac? Will he figure out the dubious message before it's too late?

Meanwhile, Stella meets a younger man who launches into a vigorous pursuit for her attention. With her past relationship failures in place, she's leery to jump into a new romance, but he persists, affections never waning. Will this charming young man win her heart?

Through the course of CSI NY 4.1, Mac, Stella along with the rest of the team continue to make Manhattan a safer place, putting away one bad guy after the next. Don't miss a minute of the new season that follows the Crime Scene Investigators of New York as their cases escalate taking them on a whirlwind tour going as far as Chicago and finally back to the city where it all began, the city where lights shine brighter than anywhere else in the world, New York.