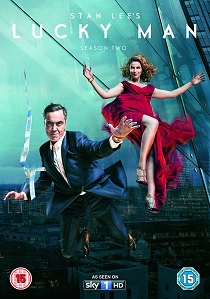 Harry Clayton is back as Stan Lee's Lucky Man: Series 2 arrives on DVD 8th May 2017, courtesy of Universal Pictures (UK).

Still wearing the bracelet given to him by Eve (Sienna Guillory), Harry refuses to use his new found 'power' to assist him in any way, mindful of the possible dire consequences. With London bright and bold as the cinematic backdrop, each week Harry and the Murder Investigation Squad are called upon to solve particularly puzzling murder cases across the capital.

Teamed with his partner, DS Suri Chohan (Amara Karan) and having been accepted back into the fold by his boss, Detective Superintendent Winter (Steven Mackintosh), Harry continues his struggle to come to terms with his gambling addiction while proving to both his wife Anna (Eve Best) and his daughter that he can stay straight, fly right and win back their trust.

Harry's meeting with the enigmatic and alluring Isabella Augustin (Thekla Reuten) throws everything he thought he knew about the bracelet into turmoil. She enters his life with a seemingly identical bracelet on her wrist. As Harry's will is tested, his state of mind begins to fray as the stakes rise and the race against evil draws ever closer.

UHD
Fast forward to the 1980s as Wonder Woman's next big screen adventure finds her facing a wide array of foes including Max Lord and The Cheetah as Wonder Woman 1984 flies in on Blu-ray and 4K UHD 22nd March 2021 from Warner ... END_OF_DOCUMENT_TOKEN_TO_BE_REPLACED
Top PicksView